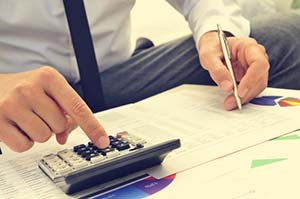 Futures for the Dow Jones Industrial Average today (Thursday) were up 77 points as Wall Street continues to eye economic data and a busy earnings week. With Q3 earnings growth expected to shrink, investors need to brace themselves for the possibility of a bear market over the next several months. Here's how to prepare and profit.

Yesterday, the Dow Jones Industrial Average dropped 157 points on a busy day of economic data and earnings reports. Shares of Wal-Mart Stores Inc. (NYSE: WMT) and Boeing Co. (NYSE: BA) weighed the Dow the most on the day. The retail giant hammered sentiment and fell more than 10% in early trading hours after the company lowered its growth and earnings outlook. Meanwhile, the aircraft stock slumped 4.4% after the company said it expects demand for narrow-body planes to decline within the next one to three years.