[BREAKING] As we published this Thursday morning, news broke that Valeant is now under federal investigation in Massachusetts and New York for its drug-pricing practices. VRX shares were down 11.5% at open. Stay tuned here.

Every once in a while, a single company combines virtually all of the market's most toxic forces. Today I feel it's my job to expose Valeant Pharmaceuticals International Inc. (NYSE: VRX).  for such a company and for the bad investment it is. Here's why.

1. It's got a risky and predatory business model.

2. It's leveraged up to the hilt, with $30 billion of debt on just $9 billion in revenue in the trailing 12 months.

3. It's on the radar of politicians, which is trouble for shareholders.

And here's the real problem...

4. It's widely owned by investors like you. Even if you don't realize it, you may own this stock in any of the seven exchange-traded funds (ETFs) that hold it as a component. 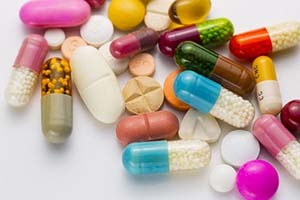 And it's really in trouble now.

This is a $60 billion multinational pharmaceutical company with a portfolio of prescription drugs, including Kinerase and Wellbutrin, one of the most frequently prescribed antidepressants in the United States, and consumer products, mostly in the skin, eye, and oral care segments. Valeant's revenue more than doubled from 2012 to 2014, jumping from $3.48 billion to $8.25 billion in just two years.

But look closely as how it did that...