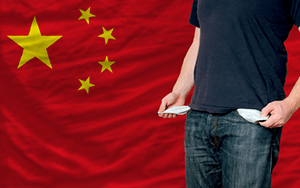 A global debt crisis is coming. The warning signs have been emerging for months.

"This market instability is not going away. It's been building for six years. It can only end one way - with a 'Super Crash,'" Money Morning Global Credit Strategist Michael E. Lewitt told readers back on Sept. 8. "It's not just China that's creating this next (much worse) sell-off. It's also the massive, $200 trillion global debt bubble that's driving the world economy to its knees."

Now, it seems, major media outlets are finally catching on...

The Global Debt Crisis Is Far from a "Fringe Theory"

This week, Salon's Bob Hennelly, an award-winning investigative journalist, wrote a well-researched piece that concluded "trillions of dollars of investment in emerging markets has been fueled by cheap credit - and the bill's coming due."

"This time it won't be a U.S. domestic mortgage crisis that goes global, it will be a global debt crisis that goes local," Hennelly wrote on Oct. 14. "The geniuses that have been driving our policy choices since World War II wanted a globally integrated economy and now they have one. In the last ten years, China and the emerging markets have racked up huge amounts of public and private sector debt, which they used to finance a production capacity that there just wasn't the consumer demand to justify."

You see, for years, China has financed a good part of the U.S. federal budget deficit. And now the Chinese economy's staggering growth rate has drastically slowed, hurting the American economy as well as the rest of the world.

This summer offered a preview of exactly what lays ahead...

"It may look like we're handling this correction like it's no big deal," Lewitt said on Sept. 8. "But we're not simply putting off the Super Crash; we're actually making the ultimate crash worse by delaying the inevitable market adjustments that have to happen."

China's woes are part of a $200 trillion global debt crisis that will inflict serious damage on portfolios and retirement accounts.

"As I keep telling my clients and my readers, we're getting close to an 'inflection point,'" Lewitt told readers. "For years, China has financed a good part of our federal budget deficit. Now, China's economy is tumbling and hurting the U.S. economy and the rest of the world."

The Lunatics Are Running the Asylum: After an incessant flow of bad economic news from both the United States and abroad, investors decided that "bad news is good news" and that they should bid up stock prices. Many investors have decided that the economic news is so bad that the U.S. Federal Reserve is not going to raise interest rates. But Money Morning Global Credit Strategist Michael Lewitt warns against chasing stock prices right now - here's why...