The Bernie Sanders tax plan to pay for his ambitious expansion of government social programs is riddled with flaws and risky assumptions. 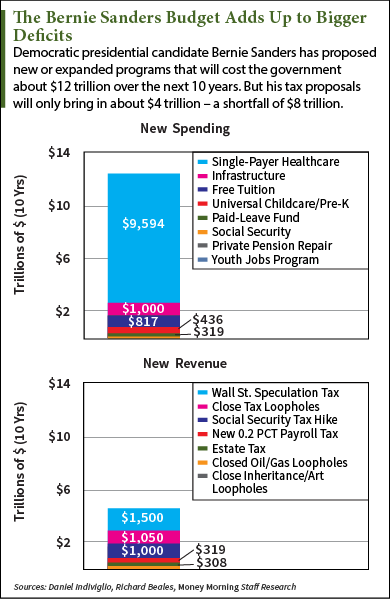 If implemented, the Bernie Sanders tax plan would cause the annual federal budget deficits to balloon, dramatically increasing the already dangerously large $18.4 trillion national debt. And many of Bernie Sanders' tax proposals would have dangerous side effects.

To be fair, the Vermont senator and candidate for the Democratic presidential nomination has all the best intentions. It's plain that he sincerely wants to help people. But America can't afford what he's proposing.

Sanders' policies, rooted in his socialist philosophy, include free public college tuition, an expansion of Medicare to all, universal childcare, and the rebuilding of infrastructure.

This week, Reuters columnist Daniel Indiviglio added up how much that would cost over a 10-year period and came up with a total of $12 trillion.

But the Bernie Sanders tax proposals intended to pay for it all – including a tax on overseas corporate profits and higher taxes on the wealthiest Americans – only add up to about $4 trillion. That's a gaping $8 trillion hole.

And some parts of the Bernie Sanders tax plan would have a dramatic impact on the markets as well as the U.S. economy.

For example, Sanders would like to eliminate the deferral U.S. corporations use to avoid paying the 35% corporate tax on foreign earnings. U.S. companies hold about $2.1 trillion overseas.

But making companies pay the full 35% tax on that money – and forcing companies to pay taxes on foreign profits as they are earned – would take a hefty bite out of the earnings of big multinational corporations.

One also has to wonder what kind of new strategies they would devise to reduce what they owe. That would reduce the projected $600 billion in revenue Sanders expects and would use to help pay for $1 trillion in infrastructure spending.

How the Bernie Sanders Tax Plan Would Crush the U.S. Economy

Here's what everyone ignores about the cost of Bernie's expanded social programs– the value of the cost savings. The private-for profit medical business in the US extracts 18% of US GDP. That compares with around 11% of GDP for every other developed nation. That extra 7% means that Americans are paying 39% more than people in places like Germany, the UK, Canada and Australia are paying for medical care. The difference is that their governments either actually deliver medical services or they tightly control the system of insurance and medical service. If the US were to nationalize the US for… Read more »

When you understand that it's not meant to be an honest discussion of issues, you'll understand how and why people could talk about these changes from one perspective (cost) and leave out the savings.

Yeah……but I dont want to pay more taxes. Am I not entitled to what I have earned?

Heres the interesting thing. Looking at these nations you so admire, their income tax rates, their sales tax rates, their inflation, the speed at which their economies grow compared to ours etc. I look at this and see their current status as what we will become if sanders is elected (god forbid). These nations are doing most or all of the things sanders is proposing and i see miniscule economic grow in Finland, a recession in France, a 180% tax on Danish cars, I could go on. No this is not worth what sanders is proposing. Not only this but… Read more »

Look at what I have written below. Your fears are completely unfounded. Taxation is little more than a cost. It destroys excess money the Fed puts into the economy by deficit spending. The government can always pay what ever the economy needs even if tax receipts fell to zero.
Tax is no excuse to say such and such an idea cannot be supported. It can.
Western economies need governments to get spending and having full employment [<2% unemployment] would be a good beginning.

The article spreads fear – bad idea. No president can do what he/she wants, there is always Congress to make the laws. That is the old checks and balances system. Sanders is right when he sees many things in the country not functioning right. That is to a large extent the fault of the ideological Republicans and now the pendulum swings back. Normal procedure.
The US is a miserable country to live in if you are among the bottom 90%.

Would you rather be in the bottom 90% of America or the average country where the average wage is $16,000?

If you hate it at the bottom 90%, then make yourself marketable. Go to college, obtain a marketable profession. Make something of yourself. If I could do it a a single mother of four, making 2$/hr in 1983-1986, when I graduated and increased my pay to a whopping $10.96/hr, then you can too. That was an increase of $9/hr just by biting the bullet and working hard in college to provide for myself and my family. And no, because I worked hard to get high grades to qualify for academic scholarships, it is not unfair that you earn less when… Read more »

So do you really think keeping the status quo is taking us in a good direction? Sure the corporations want to keep their financial power and status and of course Wall Street wants to keep all their money and sure the stock market will be affected, in fact, your very business will be affected. Yes, the financial and corporate oligarchy will be broken up and will lose their grip, and that is good and healthy. Change will bring the gnashing of teeth to some, but change and transformation is required. The leaky ship we are sailing on needs a drydock… Read more »

I guess if Greece is your idea of a government by and for the people, then the Sanders plan is quite good.

Criticism of Bernie Sanders "socialist" agenda is utter rubbish!!! The Federal Government can EASILY support free education, free health care for all, and full employment etc. All it has to do is put deposits in recipients accounts, those who actually do the work, actually employ people, actually build stuff. The Federal Government can NEVER GO BROKE in American dollars. After all it created the currency, it regulates the currency and it can spend the currency with NO REGARD to any taxation receipts. Taxation does not contribute even one cent to Federal government expenditure, so there can be no restriction there.… Read more »

See how far Zimbabwe got with its phoney money printing nonsense. Paper is not economic productivity.

Money Morning does not like the Sanders program because it will affect Wall St and help the working class on main street.

I support the Sanders program its about time you folks in Wall Street like Money Morning invest in the Working Class which bailed out Wall Street during the crash. Feel The Bern!!!

So you want America's debt to rise trillions of dollars extra and become like Greece?

I want someone to tell me what the big differences are between the Greek and Venezuelan governments and Sanders ideas for the US, because I assure you there are none.

Actually, Greece is one of the only countries in the world that is considered a true capitalist system. Greece economy fell due to the injection of debt capital and growth of the fiat. True capitalism does not endure finance. Both republicans and democrats are debating from a false premise about economics. This is due to the indoctrinated ignorance of the voters. The US is a mixed economy. Europe is a market economy. Socialism does not exist except in the diluted forms in countries which still have a active Monarchy. Socialism means that the government owns the sources of all production… Read more »