For Oct. 19, 2015, here's how the stock market did today, earnings reports, the top stock market news, and stocks to watch based on today's market moves… 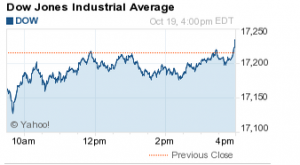 The Dow Jones Industrial Average today was flat most of the session, but finished up 14.5 points as traders digested economic data from China and a number of financial earnings reports from large multinational companies. A decline in oil prices was exacerbated by new data that suggests demand is declining in China. Shares of Chevron Corp. (NYSE: CVX) were off 1.4%, while Exxon Mobil Corp. (NYSE: XOM) was off more than 1.9%.