The Alibaba stock price is now up nearly 22% in October. 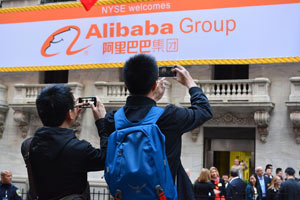 Youku Tudou operates like a mix of YouTube and Netflix Inc. (Nasdaq: NFLX), with user-generated videos as well as movies and television programs. According to the company, it has more than 500 million people access its site every month.

While Youku has a huge user base, it has been bleeding money. In the last fiscal year, Youku had a profit margin of -26.6%.

This is just the latest in a string of acquisitions for Alibaba. In August, Alibaba spent $4.6 billion for a stake in the Chinese electronics chain Suning Commerce Group Inc. Over the past two years, BABA has purchased companies in numerous industries including entertainment, retail, tech, and even professional soccer.

It's part of Alibaba's plan to become more than just an e-commerce company. It's something that Alibaba Chairman Jack Ma shared with shareholders in a letter last week.

"Our key priorities for the next decade will be globalization, development of the rural economy and big data," Ma said. "At this historic time, Alibaba Group must embrace change, invest in change and drive change."

That's a part of the reason Money Morning Executive Editor Bill Patalon remains bullish on the Alibaba stock price, even after it has fallen 31% in 2015...