Wal-Mart Stores Inc. (NYSE: WMT) had its market value wiped out by $18 billion this past Wednesday after senior management revealed the company may suffer a 6% to 12% earnings drop in 2017.

The actual story here, however, has nothing to do with the company itself.

Conventional wisdom would have you believe that Wal-Mart is a unique situation and the lowered expectations are about everything from compressed margins to the fact that Amazon.com Inc. (Nasdaq: AMZN) is eating Wal-Mart's lunch.

All of those things are true.

Analysts like Morningstar's Ken Perkins noted that the sell-off is an "overreaction and a buying opportunity."

That may also be true, but again, the story isn't about Wal-Mart.

Instead, it's about a change in market tenor - both for Wal-Mart and for the stock market.

You see, this has everything to do with a fundamental shift in market conditions that's going to catch millions of investors by surprise this earnings season.

My job is to make sure you and your money come out on the right side of the equation - so let's get cracking! Here's what you need to know about today's markets...

There's been a meme since the financial crisis began: what's bad is good and what's good is bad.

The basic drift is that any bit of bad news is actually good because it implies further Fed involvement in the markets and lower interest rates. That's why the markets have moved higher since 2009 on bad jobs data, terrible consumer confidence, and falling economic numbers. That's also why the markets have tanked on even the smallest bits of good news - a signal that traders believed would hasten the Fed's exit.

But now that the Fed has taken a "damn the torpedoes" approach to raising rates, the markets have begun to recognize that bad news is actually bad news - not the good news it was a few months ago.

And that, in turn, brings the focus squarely back to earnings, or in this case, earnings potential at a time when earnings are being revised lower faster than Tom Brady (allegedly) deflated his footballs.

This season, for example, the S&P 500 is expected to report an average year-over-year earnings decline of 5.5% for Q3, according to FactSet.

That's what makes this so dangerous.

When S&P 500 companies report earnings that are above earnings estimate, the overall growth rate goes up because actual earnings numbers replaced lower estimated numbers. But the converse is true, too. Reported declines negatively impact actual growth rates which, as you can see below, are already decelerating sharply. 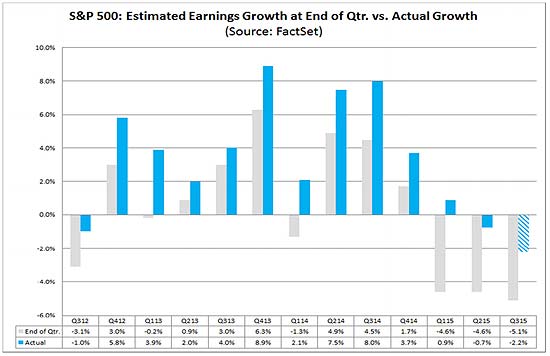 I honestly don't know why this is such a surprise to most investors.

Earnings - above all else - are the single strongest predictor of stock prices over time. If there's a decline in the works as I think there is, it will be the first back-to-back series of earnings declines since 2009.

The fact that Wal-Mart is talking about 2017 implies another four to six quarters of negative growth. Only two quarters are required for a recession.

And that is really what unhinged traders.

Really? You blame the dip in raising the salaries of bottom tier workers? What do the CEOs salaries look like? Maybe they ahould take a cut so the workers can make more? It the taxpayer that makes up for the non living wage these jerks pay their employees! While Walmart hides and puts billions in accounts offshore? Not contributing that money to the tax pool in our country! So sick of the uber wealthy paying starvation wages! And now whining about negative growth! I'm glad Walmart is slowing. Seriously, screw the Waltons!

We are going in a Post-Capitalist Era.
As wrote 100 years ago, and like In Alberta were Major Thompson and Social Credit for 30 years were saying.

WalMart has cut retail employee hours over the last several months in anticipation of lower sales and to adjust for the so called pay increases.
The result is poorly maintained shelves, out of stock, especially groceries, incomplete price changes and adding of new inventory, and longer lines at the check stands. The customers are frustrated and take it out on the employees, especially the cashiers. There is no one within a thousand feet to greet and assist the customers, contrary to Sam Walton's ten foot rule.
Sam would be disappointed in the treatment of his customers and employees.

My take-away is that Walmart has become a useful barometer of REAL economic truth. Haven't heard the truth from DC in decades. Their layoffs equal the unemployment rate, not the fake rate the Govt. uses. Their 'GDP' equals the USA's GDP, not the fake gdp we hear from washington. The US fed and other countries central banks have knowingly created this 'new economy' and could care less about where the chips fall. Keep your powder kegs dry…