This week, Republicans and Democrats alike are watching the Benghazi investigation. Its outcome will have great bearing on the 2016 presidential election - and on American history itself.

When is the Benghazi hearing, and what should you expect?

When Is the Benghazi Hearing? 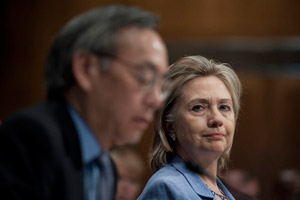 Former Secretary of State Hillary Clinton testifies at a hearing of the Senate Armed Services Committee in Washington, D.C. on June 17, 2010

Benghazi panel members are set to resume the hearing on Thursday, Oct. 22. After months of anticipation, Democratic presidential front-runner Hillary Clinton will testify before the House Select Committee that is investigating the 2012 terrorist attacks in Benghazi, Libya.

Her long-awaited appearance will be another major test for Clinton's candidacy, as the panel's seven GOP members will no doubt ask tough questions.

Meanwhile, Clinton's allies have been challenging the committee's motives. They're certain that the investigation is driven by political motives in an attempt to hinder Clinton's campaign for presidency. Even Benghazi committee member Rep. Elijah Cummings (R-MD) has spoken out against Chairman Trey Gowdy (R-SC), accusing him of being the ringleader to a tribe of showboating headhunters. This recently prompted Gowdy to ask for silence from fellow Republicans who are making public statements about the Benghazi investigation.

What the Republicans Are Watching

While some Republicans may be hoping the Democratic presidential front-runner will slip up during her hours of testimony, a Clinton aide pointed to her long day of Benghazi testimony before Senate and House committees in January 2013 as evidence of her endurance, noting that she'd suffered a concussion and a blood clot the month earlier and still "killed it," reported Bloomberg.

Still, during her testimony two years ago, Mrs. Clinton provided her opponent with plenty of fuel for the fire by quipping, "Was [the massacre] because of a protest or was it because of guys out for a walk one night who decided that they'd they go kill some Americans? What difference at this point does it make?"

What the Democrats Are Watching

Democrats on the House committee investigating the deadly attacks issued a report today that dispute what they say are unsubstantiated claims about Clinton by some Republican members of Congress and GOP presidential candidates, reported The Associated Press.

The report alleges that comments by several GOP members of Congress, including Reps. Darrell Issa (R-CA), Jason Chaffetz (R-UT), and Sens. Rand Paul, (R-KY) and Lindsey Graham (R-SC), have all been refuted by witnesses interviewed by the Benghazi committee.

"It's time to bring this taxpayer-funded fishing expedition to an end," Cummings said on Oct. 19, as reported by AP. He called on Gowdy of South Carolina to move the committee's focus "from politics to policy."

The Democrats hope the trial will come to a close. It has already taken longer than the Watergate investigation in the 1970s.

What to Expect From Hillary Clinton

Clinton is expected to begin by honoring the four Americans who died, reported Bloomberg. It is also expected that Clinton will acknowledge her role overseeing the U.S. consulate in Benghazi before stressing all the efforts that were made to investigate what went wrong.

Clinton will attempt to keep a calmer demeanor than she's previously displayed. There is much at stake, including her presidential candidacy.

To that end, Clinton's team paid close attention to the House Oversight and Government Reform Committee's aggressive questioning of Cecile Richards, the president of Planned Parenthood, last month. Richards's calm and respectful responses garnered a lot of positive attention from the public. A few members of that committee - including Gowdy and Representatives Jim Jordan (R-OH) and Elijah Cummings - are also on the Benghazi panel.

This Isn't the End of the Benghazi Investigation

This may not be the last time we ask, "When is the Benghazi hearing?"

That's because there is no definite outcome that will result from Clinton's testimony alone. The committee is expected to continue its probe after the Democratic front-runner speaks.

"By the time we're through," Gowdy said on CBS' "Face the Nation" on Sunday, "we will have interviewed 70 witnesses. She's one out of 70. I get that she gets more attention than the other 69. But, frankly, if you ask me, the eyewitnesses on the ground that night in Benghazi are more important to me, as a former prosecutor, than the former secretary of state."

China's Middle Class Surpasses U.S.: It's official. The size of China's middle class has surpassed the U.S. middle class for the first time ever. The hard numbers are astounding. Within 15 years, China added 43.4 million adults to its middle class. The United States added about half that: 22 million. In fact, also within the past 15 years, China's household wealth growth increased at an astounding rate...