Yahoo stock has climbed 16% in October. Now investors are awaiting the Q3 earnings report on Tuesday, Oct. 20, as a lackluster report could put an end to that run. 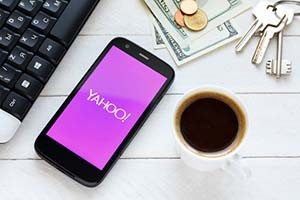 Investors will focus on earnings per share and revenue, but the most important part of the Yahoo Inc. (Nasdaq: YHOO) earnings report will be an update on the Alibaba stock spin-off.

On Sept. 29, Yahoo officials announced that they will be moving forward with spinning off the company's 384 million shares of Alibaba Group Holding Ltd. (NYSE: BABA). Yahoo has previously said it plans to spin off those shares through a tax-free deal during Q4.

Still, Yahoo's board believes the deal should move forward without any issue from the IRS.

You can see how important the Alibaba stake is to Yahoo when you compare it to Yahoo's total market cap of $31.5 billion. At today's opening price of $71.80, those Alibaba shares are worth more than $27.5 billion.

That means much of Yahoo's business is based entirely on its stake in Alibaba.

MKM Partners' Rob Sanderson detailed this in a letter to investors last month:

"We think Yahoo's core business should support a valuation of 4 times earnings before interest, taxes, depreciation and amortization (Ebitda), which implies $4 per share on our current estimates (relatively in-line with consensus)."

According to Sanderson's letter, Yahoo and CEO Marissa Mayer will switch their focus to the company's mobile presence, native advertising revenue, search business, and other core businesses once the spin-off is complete.

But readjusting the company's focus is just one reason Yahoo stock investors want the company to move forward with the Alibaba spin-off...

Sorry, the article describes the impact of BABA but does not mention how Yahoo! stock would rise from now on.

Will Yahoo go up or down?