Right now, many of the planet’s gold miners are eking out in survival mode, breaking even if they’re lucky, or losing money on every ounce they produce. It’s become unsustainable.

Meanwhile, globally, there are thousands of gold mines holding tens of millions of ounces left underground. Essentially, those mines and the gold stuck inside are worthless – unless someone devises a new way to extract the “leftovers” in a safe and cost-effective way.

Well, there’s a small Canadian company with the technology to do precisely that. This equipment will turn the mining world on its ear in a way not seen since the shovel was invented.

The company’s “thermal fragmentation” approach will be as disruptive to mining as fracking has been to oil and gas… except that it’s highly environmentally friendly.

That’s welcome news, but the best part is that investors can buy shares of this company and its revolutionary technology for a song right now.

Here’s how that firm is going to cut mining costs by at least 50% and send production soaring worldwide, no matter what happens to gold prices…

This Breakthrough Has Been a Long Time Coming

Gold mining has been around in one way or another for at least 7,000 years. Over that time, it has naturally managed to evolve and modernize – to a point.

Yet despite technological advances improving nearly all industries in the last few decades, gold mining has remained rather stagnant, boasting only small incremental improvements.

Mining gold is a tough business, too. It often takes decades to discover an economical deposit, then define, permit, build, and finally start pulling metal out of the ground. All the while, the business is subject to often large fluctuations in the price of its end product, gold. 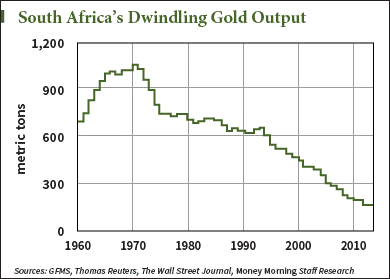 Ultimately, achieving production involves massive upfront capital expenditures and high fixed production costs. Thanks to slumping prices, the gold mining industry is about where the U.S. oil and gas industry found itself before fracking was adopted across the sector in North America.

And as we’ve seen in the last four years, the price of gold can fall dramatically, then stay low for an extended period.

South Africa knows this all too well. For many years until 2006, South Africa was the world’s top gold producer; it’s where nearly a third of all the gold ever mined in history has come from.

But today it draws a humble seventh place. The South African gold mining industry is in tatters, and output is a shadow of its former levels. In fact, of its 6,000 gold mines, only a tiny fraction are still in operation.

Clearly, gold mining is more than ready for a breakthrough. Here’s what’s going to save the day.

Patented in 10 countries, this equipment allows miners to accurately target and extract narrow veins of gold or other metals.

Here’s how it works.

First, a pilot hole is drilled into the gold-bearing rock. Then a thermal head is inserted and ignited, generating just sufficient heat while injecting air into the hole. That’s when the fragmenting begins.

The heat cushion causes the rock walls of the hole to begin to “spall” and fall away in very small fragments of 0 mm to 13 mm. This procedure continues expanding the size of the hole until the desired dimension is reached.

It’s so fast and powerful that a 1.2 m² hole is created and extracted in less than 10 minutes.

At that point, a new pilot hole can be drilled further along the gold vein and the process repeated, with resulting ore fragments containing the valuable gold.

I believe in lowering cost to do business in order to make businesses more profitable . All we have left to discover is a way of slowing the tax grab on businesses .

Legislation sits in Congress to do just that, as well as many other things… HR 25, S 122 – FairTax Act. http://www.fairtax.org

could this process enable Taseko to get permits that were blocked by first nation?

I enjoyed your article "The Biggest Thing to Happen to Gold Mining Since the Shovel." In it you state that "Thanks to near surgical precision, roughly 400% less ore needs to be extracted." How can that be since once something is reduced by 100% you are at zero and no further reduction is possible. My guess is that you meant to say "Thanks to near surgical precision, roughly one-fourth the amount of ore needs to be extracted."

Dick, thanks for your reply.

When I stated that “roughly 400% less ore needs to be extracted”, I was referring to the company’s own information,
Stating that their method leads to 400% less dilution. Essentially, I understand that to mean some 4 times less waste rock needs to be extracted in order to obtain the same quantity of gold bearing ore.

I think you mean waste is a quarter, or is reduced by three quarters.

The fact of the matter is quite simple. The thermal fragmentation mining method produces the same amount of precious metal (gold, silver, palladium, platinum) with one tonne of fragmented ore compared the 4 tonnes of conventional ore.

I assume there is something not explained in a right way. First what is the definition of ORE? (used by the author). So why should we extract less ORE?
I do not want to criticise the article which is a brilliant marketing material from which smart consultants may make some money!! I will repost that article at my blog.

Who put up the $40 Million on the mine they intended
to produce?

I am interested, and a share holder of NIP. If results mentioned as good as indicated, going to be positive.
Will continue to follow.
Cheers
Darrell

How would one invest in the Dragon? You say Nippon is listed on the Toronto Venture Exchange. I cannot find it on any American exchanges.

How much did you get paid to write this? How come no disclaimer.

Thanks for reading and commenting. I should point out here that our Editors are strictly prohibited from taking positions or establishing relationships with the companies they write about for you in Money Morning. This policy goes beyond the disclosures and disclaimers you'd normally encounter in financial publishing, but we feel it's the best way to ensure editorial independence and integrity.

The article forgot to mention Globex Mining Enterprises Inc (GMX-TSX) which holds a 5% Gross Metal Royalty on the first 25,000 ounces of gold from the Rocmec 1 property and then a 3% Gross thereafter. Globex doesn't have to put up a single penny.
Globex Mining Enterprises is a project generator with 129 owned project assets
(67 precious metals, 43 base-metals and 19 industrial minerals or metals) most based in eastern Canada and 3 in the US. 49 of Globex's projects have historical or NI 43-101 resources and 30 have former mines on the properties. Globex has no debt, only 41 million shares out and has never done a roll-back. Globex has no debt or property obligations.

Nip.v stock rose 300% today with no explanation other than this article to my knowledge.Is this the first article about NIPPON and do stocks featured in MR Krauths articles commonly increase so drastically in one day and if so do they hold there gains ?

As per usual, there are an unlimited number of shares on the ask keeping a lid on the bids. It has been in the dumps at .03 from July until this letter came about. Historically at the .50-.80 range before Gold crashed. So if it makes it back there anytime I'd be happy as all heck.

Peter your math is still too horrendous to let slide-possibly because of definitions. As several gentlemen pointed out, you can never reduce less anything than 100% using standard definitions i. e. % reduction =(old-new)/ old x 100. The old amount is always in the denominator- not the new. You could say conventional mining has to use 400% MORE ore than NIP or that NIP uses 75% less ore but never 400% and less together. NIP needs to change its wording also. This makes them look like they are willing to violate any rules to look better.

I'm going to run that 3 gram per ton by my retired gold, copper, silver and zinc mining Chief/Senior geologist husband. Something doesn't look right. That looks like a very low yield per ton to me. I would like to see the difference in cost between the usual milling of gold to this new method, if it really fractures the ore to that small of size. I want to see these tiny particles of ore coming out of that new rig.

Gold yields are usually measured in ounces per ton, not grams per ton. I haven't been following the geology stuff since my geologist husband retired. He worked for a Canadian junior. Something doesn't look right, including the 400% percent reduction in ore waste/processing. The numbers don't add up.

The company has no idea what you're talking about.

How do you explain that?

Why, it took 6 years to hear about it?

What went wrong in Nevada?

One internal report says that the company is in default on a current debt payment and "the Company does risk losing control of both its equipment and thermal fragmentation license". The same internal reports disclose that the company has no cash of its own to begin mining its own assets and needs more debt to begin production. They appear to have even more debt payments coming due they may default on.