4:30 p.m. UPDATE: The Amazon earnings report was released after the bell today, and the company beat on the top and bottom lines. The retail titan reported earnings per share (EPS) of $0.17 on revenue of $25.4 billion. Analysts projected a loss of $0.13 per share on revenue of $24.9 billion.

Amazon Web Services (AWS) – the company’s enterprise cloud service – posted net sales of $2.1 billion, up from $1.2 billion a year ago.

Amazon earnings for Q3 2015 come out after the closing bell today (Thursday), and traders are uncertain the online retail giant will meet expectations.

Analysts expect Amazon.com Inc. (Nasdaq: AMZN) to lose $0.13 per share on revenue of $24.9 billion. That would mark a 14.6% decline in earnings per share (EPS) from the year-ago quarter and a 21% growth in revenue. 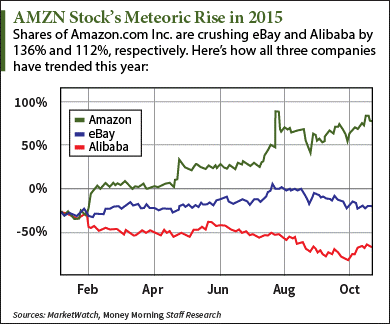 Most of the attention in the Q3 Amazon earnings report will be on growth of the new Amazon Web Services (AWS). Last quarter, the company’s enterprise cloud service made $1.8 billion in revenue and is set to hit $7.3 billion by the end of 2015. AWS already owns 40% of the server market for app companies, according to a SaaS survey by Pacific Crest.

Some investors predict Amazon earnings for Q3 will push the stock price above the $600 benchmark. After all, that’s only 6% higher than yesterday’s closing price of $555.77.

According to Money Morning Options Trading Specialist Tom Gentile, Amazon stock could jump even higher than that. Shares saw an average 15.3% gain in the days following three out of the last four earnings reports.

Here’s how you can profit from those favorable odds…