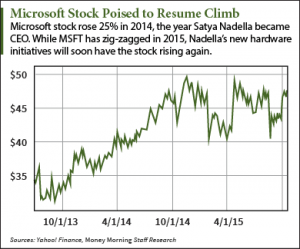 UPDATE: With its cloud businesses surging, the 2016 Q1 Microsoft earnings came in better than expected, prompting Microsoft stock to jump about 6% in after-hours trading.

The Q1 MSFT earnings showed that the company’s cloud strategy continues to thrive. Office 365 revenue grew 70% in constant currency, while its enterprise-oriented Azure business more than doubled year over year.

Another bright spot was a 29% increase in search revenue from its Bing operations.

Meanwhile, the Q1 Microsoft earnings showed continued weakness in its PC business. Revenue shrank 6% despite the arrival of Windows 10.

Microsoft’s smartphone revenue plunged 54% as the company retrenches with its new Lumia phones.

The 2016 Q1 Microsoft earnings, due out after the market close today, are likely to build on the momentum from the last quarter.

But the Q1 Microsoft earnings will contain only a glimmer of the catalysts destined to drive Microsoft stock higher over the next two years.

Wall Street forecasts Microsoft Q1 earnings of $0.58 a share on revenue of $20.96 billion, according to Thomson Reuters data. The earnings number is an increase of 9.26% over the same period last year, while the sales number is 9.6% lower.

In the last quarter, Microsoft beat expectations on the strength of its cloud businesses, which grew 106% year over year.

So most analysts will be looking hard at the cloud business as well as the progress of Windows 10. The latest version of Microsoft's flagship operating system was released in September.

Both are important to MSFT stock but fit in to a larger strategy that has only recently become apparent.

Following the introduction of some impressive hardware at Microsoft's New York press event earlier this month, it's become clear that the Redmond, Wash.-based tech giant is looking to build its own Windows 10-based ecosystem.

"The ecosystem approach means you'll be able to rely on Microsoft for all your computing hardware needs - a fitness band/watch, a smartphone, a tablet, a laptop, even a virtual reality headset," said Money Morning Defense & Tech Specialist Michael A. Robinson. "Really, this is some of the most exciting and potentially profitable news we've ever had from Microsoft."

Driven by this developing ecosystem, Robinson believes Microsoft stock will gain 25% to 30% over the next 28 to 30 months. That would put the Microsoft stock price in the $60 to $62 range.

Here's how the evolving Microsoft ecosystem will generate billions of dollars in value for investors...

The Surface Book - This is the first laptop Microsoft has ever made. The lid/screen detaches to become a standalone 13.5-inch tablet. And while the tablet and PC markets are both declining, the hybrid market - of which the Surface Book is the ultimate incarnation - is growing.

The Surface Pro 4 Tablet - The original Surface tablet in 2012 struggled, but Microsoft's perseverance has paid off with the Surface Pro 4. The newest version can compete with Apple's iPad Pro both in price and performance. Research firm IDC predicts that Microsoft will double its tablet market share from the current 7% by 2019, which would push revenue from this product to $2 billion annually.

The Lumia 950 Smartphones - Microsoft's new Lumia 950 and Lumia 950XL phones not only run Windows 10, but also have the graphics juice to run a separate display. Plug one into a Microsoft display dock along with a keyboard, and you have a full-blown PC. With only 3% of the global smartphone market, innovative products like the new Lumias give Microsoft a great opportunity to grow its share.

The Wearables - Sleek and curved, the Microsoft Band 2 can access alerts from Uber, RunKeeper, Twitter, Facebook, Starbucks, and more - as well as the entire Microsoft Health platform. But the HoloLens augmented reality headset represents an entirely new computing platform. Transparency Market Research says global VR gaming alone will grow by 39% a year through 2019. Developers will get their hands on the HoloLens next year, and a consumer version could arrive as early as the end of 2016, although 2017 is more likely.

The Bottom Line: When the 2016 Q1 Microsoft earnings are announced, analysts will focus on the cloud business and Windows 10. But those products are just part of a bigger strategy to build a complete ecosystem of hardware, software, and services that will rival Apple's. The foundation of this ecosystem is the hardware MSFT introduced earlier this month. As it matures, this ecosystem will drive Microsoft stock higher by 25% to 30%.

Innovation Will Drive Intel Stock: Intel Corp., like Microsoft, missed on mobile, and its stock languished for years because of it. Now Intel is using its technical prowess to create new lines of chips tailored for growing computing markets like the cloud and the Internet of Things. Here's a look at those chip technologies and how they'll revitalize Intel stock...