China reported its most recent GDP figures at 6.9% growth versus the officially targeted 7% everybody was expecting. Predictably, the world gasped:

Now the media's going to spend the next 72 hours talking about China's GDP "miss" as if it's a real number. But I want you to try to pay as little attention to the discussion as you can. It's a waste of time and hazardous to your finances.

Instead, focus on the data I'm going to share with you today.

For the simple reason that China's going to fuel the world's best businesses for decades to come. And, in the process of doing so, create yet another round of millionaires.

I want you to be one of them.

Ignore China at Your Peril 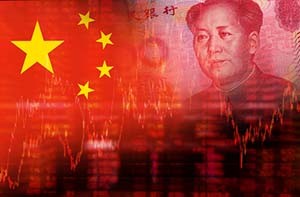 Beating up on China has become a national sport for Western commentators. Sadly, very few have actually set foot in the country, much less spent the decades needed to really get a handle on what's happening there.

At this point, their arguments are as predictable as they are laughable. Critics charge that the country isn't democratic, or point out China's in debt up to its eyeballs. Their economy is slowing, they lie about their statistics, and their "growth" is being propped up to meet political objectives, goes the chorus.

As I pointed out on "Varney & Co." Monday morning, all of these things make them exactly like us.

Washington openly manipulates every data stream dished out to the American public as gospel. There are seasonable adjustments, cost of living improvements, and constantly changing calculations.

The U.S. government, for example, has changed the way it calculates the Consumer Price Index (CPI) more than 20 times in the past 30 years. Labor stats are calculated six different ways by the Bureau of Labor Statistics. Gross domestic product is deflated or inflated at will depending on "methodological changes" over time. It's revised incessantly.

The Fed is especially blatant about manipulating data to arrive at the results it wants. For example, Mike Bryan, a senior economist in the Atlanta Fed's research department, recalled walking to the podium during a 1991 Fed meeting in Cleveland and being greeted with "now it's time to see what Mike is going to throw out of the CPI this month" prior to a discussion on destabilizing influences that might conflict with the official story. Stephen Roach, who worked for the Fed in the 1970s and is now a Yale faculty member, alleges that the Fed missed the vicious inflationary cycle of the 1970s because it monkeyed around with the CPI by excluding nearly half the CPI data basket from calculations, according to The Economist.

Every nation on earth engages in some form of monetary manipulation. When all else fails, the powers that be will manipulate the data, and that's as true here as it is in China.

By far though, my favorite "argument" is the notion that China cannot succeed because it's not a democracy. That's a very popular line of thinking that, sadly, is grounded in ignorance, not to mention populism.

I have been reading your articles for the past few days and a few others from MM. I am so surprised to see you mentioned our late statesman, Mr Lee Kuan Yew in this article about China. I think his leadership and political acumen must have left a deep impression on you? Our nation went into deep mourning when he passed away early this year.

Singapore has a close and warm relationship with China and U.S since our independence in the 1960s. I totally agree with your view about China. Unfortunately, in your part of the world, China has become a dirty word but I totally understand where the Americans are coming from.

You couldn't have summed it more succinctly with that paragraph 'The only decision you have to make is whether your money will be "at the table or on the menu."'

I look forward to reading more of your financial insights!
Cheers
Kelly

No argument at all (to me) that our Democracy has become unworkable. The institutions, including Congress or the Courts, can no longer address even relatively simple policy issues. Laws are no longer equally respected and obeyed. Judges and pols pick and choose. In fact, America stopped being a Republic over 85 years ago. That America is long gone.

Yet at the same time, billionaire Oligarchs can attract any state's U.S. Senators any time they want simply by putting-up a flag and bringing in the card tables on short notice. Fund raisers get any politician's attention, as would putting out a stake for your pet dog.

Oligarchs get quality one-on-one time with senior politicians and usually get what they want. In contrast, middle class voters seldom get anything. So, most think the system is rigged. Can you blame them?

Why is Alibaba down from its post-IPO high of $120 to $72, while Facebook has broken the $100.0/share barrier ? Where is reality in this market? (Real) China Story or American exuberance?

There are no big picture mechanisms involved within Capitalism.

Once one company off-shored it's manufacturing to China, it gained competitive advantage and other companies had to follow suit.

Eventually all companies have off-shored nearly all manufacturing to China and there is no competitive advantage.

The Western economies have been hollowed out and the balance of power shifts to the new power house China.

As our businessmen only thought about short term profit they didn’t think about China’s lax attitude to intellectual property rights. It handed China decades of product development knowledge and manufacturing expertise on a plate.

Then we repeated the process with software design and service activities, like call centres. This time they were off-shored to India, making India stronger and hollowing out the Western economies even further.

The US is now fretting about a powerful China, which was created by allowing Capitalism to do what it does when not restrained.

When short term profit is the only motive, the big picture consequences can be a disaster.

And what about the now-cozy relationship between China and Russia, including joint military exercises and membership in the BRICS consortium? Is this an effort to basically take down the U.S. and create a financial sort of cartel? It appears that we are the financial target and perhaps the military show is just that, for them to show unity and enormous strength. Just a guess on that one.