Glencore Plc. (LON: GLEN) is the world's biggest, most important commodities trader, and it is in big trouble, under heavy pressure from all directions.

Too many things have to go right for Glencore to escape. If it can't pare down its debt load fast enough, if it can't raise cash fast enough, if ratings agencies junk it, or if commodities prices keep falling, Glencore could implode – violently.

And thanks to its outsize position and importance to the global commodities market, any meltdown at Glencore would have truly global implications across the commodities and debt markets, derivatives, emerging markets, and, of course, U.S. and world stock markets.

Glencore's situation is really complicated, but I'm going to show you a simple way to cash in big when this company heads over the cliff – and takes a large portion of the global economy with it…

What to Expect as Glencore Inches Closer to Disaster

Going forward, the two key factors to watch are:

If the stock falls back to its September lows, it's time to get defensive. Or if there's any meaningful ratings slide, get short. 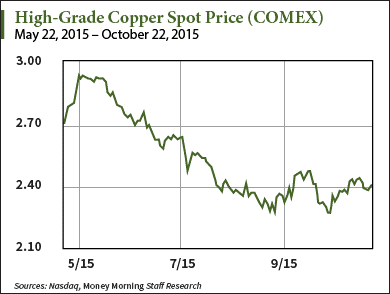 Commodities prices have to be watched closely. If copper falls steeply from current lows of $2.37 a pound, a cascade of selling from unwinding the Chinese carry trade would have immediate global repercussions. By the way, copper traded as low as $0.60 a pound back in 2004. So a drop from current levels could be steep – and play out as fast as a lightning strike.

Emerging markets will sell off. And so will China.

Commodity-based stocks and exchange-traded funds (ETFs) will get creamed.

And financial stocks will get hit because bad loans will start sprouting like weeds. Billions of dollars of leveraged, commodity-backed loans and junk bonds have been packaged and warehoused by yield-hungry banks, high-yield mutual funds, and ETFs.

Here's How to Profit

The price of copper is a key to the future health of Glencore. And that means it's a key to our trade.

To cash in on copper's plunge, I like buying out-of-the-money puts with at least three months to expiration on the iShares MSCI Chile Capped Investable Market Index Fund (NYSE Arca: ECH).

I also like shorting ECH – even if I have to pay out part of the dividend while I'm short. Timing is an issue with buying puts: They give you more leverage but can expire worthless if time runs out before the stock takes its hit.

The price of copper has already broken below $2.50 per pound, so it's a good time to buy puts or short ECH. Copper accounts for half of all Chile's exports. The country is a mining powerhouse, so falling commodities prices will act as a kick in the teeth for the Chilean economy.

Love the way u deduced Glen logically, hard to argue.

It may be good for you to printing this and carry it with you when you look for deals.