With the anticipation of a possible bear market in 2015, we're looking back at the 10 worst pullbacks in bear market history.

A bear market is when a market falls 20% from its high point. At Thursday's opening price of 17,180.88, the Dow Jones has fallen 6.4% from the high it set in May. So we still have a ways to fall before hitting a bear market - but these drops can happen quickly.

Also pointing to a bear market in 2015 are analysts' estimates we'll see the first earnings recession since 2009 this quarter and slowing economic growth in China, which has created extreme volatility across global markets.

There's also the fact that we're due for a pullback. As the following chart shows, the last big bear market was in 2007.

Here's where it ranks among the 10 worst drops in bear market history, plus how long each one lasted: 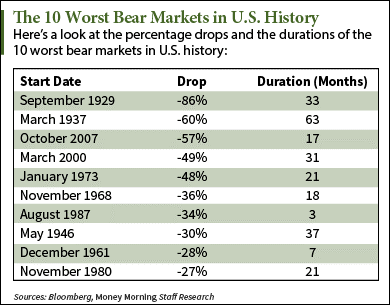 The biggest bear market in U.S. history started in September 1929 following the stock market crash of 1929. During that 33-month span, the S&P 500 dropped roughly 86%.

The longest bear market in history happened just eight years later and lasted for more than five years. Starting in March 1937, the S&P 500 slid 60% over the next 63 months.

But bear markets don't always last that long. In fact, two of the worst drops in bear market history happened in less than a year.

Because these drops can happen quickly, it's also important to be prepared for a bear market. And with several indicators pointing toward a bear market in 2015, here's our strategy for protecting ourselves from a falling market...