The S&P 500 has dropped 3.8% since the end of July, but that's nothing compared to the losses we've seen from biotech stocks.

While the broader markets all tumbled in late August following the stock market crash in China, many have rebounded. Since Aug. 29, the S&P 500 has rebounded 2.8%.

But the biotechnology indices have only continued to fall. Here's a look at their performance since July 20, compared to the S&P 500: 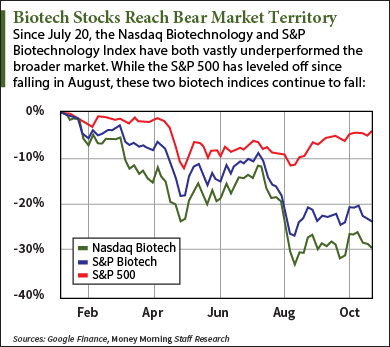 Here's why biotech stocks in particular have performed so poorly lately...

Why Biotech Stocks Are Underperforming

Martin Shkreli, CEO of Turing Pharmaceuticals, received very public criticism in September for raising the price of a life-saving medication by 5,000%. That put focus on the entire pharmaceutical sector.

Shortly after, a report from The Wall Street Journal indicated the 30 highest-selling drugs in the United States saw their prices increase roughly 76% from 2010 through 2014. During the same time, demand only rose 20%. That made it clear the price gouging was not just limited to one or two companies.

VRX stock has dropped more than 45% this week alone after a report from Citron Research called the company "the pharmaceutical Enron." The report alleges that Valeant engaged in a series of sham transactions to inflate its drug sales.

All three of these factors have combined to bring down biotech stocks over the last several months. The sell-off could persist as regulators continue to investigate the recent practices of major pharmaceutical companies.