The Hillary Clinton email scandal could yet derail her campaign, which of late has looked virtually unstoppable.

Since her strong performance in the Oct. 13 Democratic presidential debate, fate has smiled on the Clinton campaign. 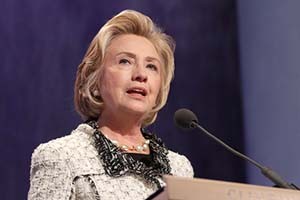 This week, she easily deflected aggressive questioning from Republican members of the House committee investigating the 2012 Benghazi tragedy.

And Clinton has reversed a months-long slide in the polls. Since the debate, her numbers in the Real Clear Politics average have risen from 42% to 47.8%. She'll pick up more support now with Biden decisively out of the picture.

And yet the Hillary Clinton email scandal continues to stalk the campaign. It's the last real obstacle between her and the Democratic nomination for president - and in all probability, the White House.

Clinton and her supporters have insisted that she did nothing wrong regarding her use of a private email server during her tenure as secretary of state.

And if it were just another GOP Congressional committee conducting an investigation, Clinton would have nothing to worry about.

But Republicans aren't the ones looking into possible Hillary Clinton email wrongdoing. It's the non-partisan Federal Bureau of Investigation (FBI).

The progress of the FBI probe, which launched in early August, is unknown. But we do know the agency won't give Clinton a pass because of her status.

"If you know my folks, you know they don't give a rip about politics," FBI Director James Comey said in a meeting with reporters Oct. 1. "And my job as director of the FBI is to ensure that we remain those things I said we are: competent, honest and independent - and that we do our work well."

The wild card, of course, is whether the FBI investigation of the Hillary Clinton email activities will result in any charges. That's what her campaign fears most. Even if she could successfully fend off any punishment, it's very doubtful any presidential candidacy - including hers - could survive an indictment.

Here's why the FBI investigation into the Hillary Clinton emails could end up being the kryptonite that destroys her quest for the presidency...

I hope the FBI is steadfast to the letter of the law. I'm no expert in classification, but I've read enough from those who are to agree that if this were just about anyone beside Clinton, they'd be in trouble by now. A recent poll indicates 75 percent of Americans assert that the federal government is corrupt. We simply cannot restore trust in elected officials by giving an above–the-law-that-pertains-to-the-rest-of-us pass for privilege to someone whose chief descriptors are "liar, dishonest and untrustworthy."

The Republican lynching of Hillary Clinton just made her an underdog to the audience and prospective voters at large watching. That this was a political persecution long before the session began is already a perception of 70% of Americans. That it played out the way people expected it to, was actually the surprise. The thought was, given the wide public perception that it is going to be a persecution, the GOP would have been wiser and rein in their virulence. A lot of us who were sitting on the fence thinking whether we should vote for her have now majorly made the decision to support her. Those who wouldn't vote for her, still just wouldn't. In the grand scheme of things, the GOP attack just backfired and widened the path to Washington for Hillary. I would think the GOP hate the prospect of Donald Trump so much, they made a heroine out of Hillary.

Clinton criminal defense not likely to be cogent : http://www.nationalreview.com/article/423340/clinton-e-mail-scandal-a-laughable-defense

Get used to saying it

Guilliani is still trying to get his name in the papers. He is as discredited as anybody. Regardless, non of the above will happen.

Hopefully, Hillary's email saga will blow up in her face soon and blow her presidential campaign out of the water and blow it into smithereens. America deserves a President that is trusted and respected – one who can Make America Great Again!

The FBI will never bring a charge against her….even if she has the smoking gun in her hand. They DO bend to political pressure regardless of what they say to the press. Unless republicans find someone very good, we are stuck with another 8 years of Hill-Kill– killing this country in so many ways. Why 8? Incumbents usually get re-elected. Keep your powder kegs dry friends.

And who would that be?

I am still waiting for the email, and I know there is at least 1, that came from the Libyan prime minister severa 's days prior to the attack stating that there would be an attack on that day at that location and telling her to get her people out post haste. I have a good friend, a Libyan, who was there at the time that she and Obama were both emailed and calls placed as well. Both the President and ms Clinton should put in jail for the lies and doing nothing to save our people in Benghazi

Don't you get it, when the Clintons came out from the white House
they where broke, than they became millionaires in very short years
now she wants to get into the white house to become billionaires, just
like Donald, I can see true to her, she do not care anybody, just her
Family, I am 89 years old, and believe me, thaths the Truth, Thank
you

Trey Gowdy and the rest of the bullies that tried to destroy Hillary…basically guaranteed the first woman president being elected in this next election. They were so rude, so disgusting, so mysogynist they showed themselves…and they made Republicans look like fascists and that is quite unAmerican.

Really! That's what you thought about? Not the very wrong doings of Hillary? Hillary made Hillary do it. Deception, deceit, lying, thieving, corrupt, shall I go on? What are your values?

Clinton and the White House have gone to extremes to stop us from knowing what happened in Libya during 2012. There are two possible reasons to explain why they have done this.

The first is to hide an arms trafficking by the State Department. The State department provided 400 MANPADs (shoulder-held surface to air missiles) to rebels in Libya, many of which are still not accounted. The US air attacks on Gadhafi's arms stockpiles released about 15,000 MANPADs that are still not accounted. The White House failed to secure these sophisticated weapons. Stevens was in Benghazi to traffic these weapons to rebels in Syria. That much of these 15,000 MANPADs may now be in the hands of terrorists throughout the world is reason that Clinton and the White House have acted so strangely in hiding this evidence.

The second is that the Benghazi attack was staged to capture the ambassador and staff. According to the plan, the president would then broker a deal to exchange the Blind Sheik for the hostages. The terrorists would get the sheik and the president would take credit for brokering the deal and saving the lives of the hostages. That would bolster his failing reelection campaign. For Clinton & the White House, the attack did not go as planned explaining why they were unprepared to provide support for the consulate. For obvious reasons, Clinton & the White House did not want this to become public.

It is even worse than your speculative concerns. Islamists are the same. different only by degree. Isis, Al Quaeda, Boko Haram etc etc etc openly want to kill us. Ohers are musch more polite but equally want to bring dar al harb 9the world of conflict – us) into dar al islam (the world of submission to their god, allah). The polite ones Saudis, Qattaris, emirati princelings, under the rules of the Hudna (see treaty of Hudabaya) approve and support "testing" us at least every ten years. They are paying for Isis to challenge the west and create the califate. See all the new Toyota trucks they have and the millions too boot. The Dictators were a cap on the Islamic Apocalypse: Hussein, Asad, Kaddaffi, Sadat. To get rid of Kadaffi and allow the brotherhood to reign the Qattaris bribed Clinton with 2.5MM to their fund and millions more in "speaking fees." How else could yo explain US involvement with the Libyan terrorists, Some "Arab Spring" BS? No. Kaddaffi had become a source of info against our common Islamic foes. His son even contacted the State department essentially saying we could have anything we wanted from them (it was in Hillary's server!!!!) before our supposed proxies destroyed the Kaddaffi regime. Hillary's new friends were armed right up until Benghazi. The Arms were probably why the Ambassador was in Benghazi and it was for Syria, ruled by a secularist dictator who protected minorities and fought radical Islam. He's hated by the "true believers" to the East and, ironically Hillary, and Obama (and source for more Clinton Cash)

The CIA is trafficing arms through Libya into Syria. In the words of Gen.Dwight Eisenhower ,as he was leaving the presidency: "Beware of the military-industrial complex." Of which he was a high ranking member. It IS a perpetual war making machine which creates wars to guarantee a market for US weapons. Ecomonics 101: Create a market and fulfill it's needs.

Will the United State's electorate elect a president who cannot have a security clearence?
National Top Secret classified intelligence is compartmented into categories dependent on a need to know and the sensitivity of the source. One such category is satellite and signals intelligence, termed SI/TK.
As Secretary of State, Hillary Clinton in order to have access to SI/TK products, would necessarily be briefed in order to be provided with information to assist in performing her job. She would be briefed on system capabilities and sensitivity of the information. Further, she would be briefed that all classified intelligence communications are to be transmitted and received on the Secret Internet Protocol Router Network (SIPRNET) and can only be sent to recipients with a same or higher clearance, certainly not Sidney Blumenthal or other non cleared individual. If in fact, she was briefed and compromised this information, the law requires that her security clearance be revoked.