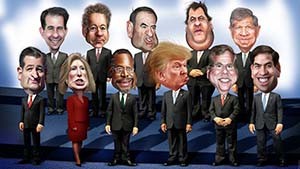 GOP debate preview: The next showdown between the 2016 Republican presidential candidates will take place on Wednesday.

This marks the third GOP debate of 2016. Its format was actually changed after several candidates complained the last few weeks. Now it is structured as a two-hour debate, including commercials, plus:

The new criteria satisfy several of the campaigners' demands for opening and closing statements, as well a 120-minute cap on the debate time (including commercials).

Just like the first and second GOP debates, hosted by FOX News and CNN, respectively, this third round features both "undercard" and "prime time" events.

Here are the candidates, when to watch, and the most notorious (and personal) rhetoric missiles launched thus far…

GOP Debate Preview: The Poll Data and the Carson Phenomenon

According to a Monmouth University poll released today (Monday), Carson is leading Trump 32% to 18% among likely Republican Iowa voters. In an August Monmouth poll, the two men were tied at 23%, reported CNN.

Behind Carson and Trump, here's how the other candidates shook out in the poll…

A Bloomberg poll released on Friday first reported Carson surging ahead. On the news, Trump took a proactive approach to the media ahead of Wednesday's debate, reported CNN earlier today. He spent the weekend working the media to bolster attention and excitement over his campaign.

Trump wasn't alone in his efforts this weekend – Carson made some fiery statements as well, as did Sen. Marco Rubio and New Jersey Gov. Chris Christie…

GOP Debate Preview Feisty Media Moment No. 1: Presidential hopeful Marco Rubio slammed rival Donald Trump on CNN's "State of the Union" by calling the real estate mogul an unfit commander-in-chief. "To this point in the campaign, he has not proven an understanding of these issues or the preparation necessary to be the commander-in-chief of the most powerful military force in the world," Rubio said on Sunday.

GOP Debate Preview Feisty Media Moment No. 2: Donald Trump also appeared on CNN's "State of the Union" and used the experience as a time to take aim at Dr. Ben Carson. "He can't do with a lot of things like I do, so we'll just have to see what happens," Trump said of Carson. Trump also alluded to Carson's religious beliefs, saying he didn't know what Seventh Day Adventists were "all about." Some saw this statement at as a dig at Carson's non-traditional, albeit still conservative, religious beliefs.

GOP Debate Preview Feisty Media Moment No. 3: New Jersey Gov. Chris Christie also had some choice words to share on CNN's "Face the Nation" on Sunday, particularly taking aim at Democratic presidential front-runner Hillary Clinton. "She has no accountability and no transparency to what is going on," Christie argued. "Everything has had to be dragged out of her. And I don't think they did an effective job in getting at that. But here is the thing. Come next September, when I'm on the stage with her in the debates, she will have a former federal prosecutor asking her these questions."

GOP Debate Preview Feisty Media Moment No. 4: Dr. Ben Carson said he would "love" to see Roe vs. Wade overturned on CNBC's "Meet the Press" on Sunday. He went on to explain that he would like to make abortion illegal nationwide. Carson is infamous for his softly spoken controversial statements. This past weekend's appearance contained nothing less. The Republican candidate said that, while he opposes abortions for unwanted pregnancies and in cases of rape and incest, he might be open to allowing abortions to preserve the life and health of the mother.

Tick, Tick, Tick: The Hillary Clinton email scandal could yet derail her campaign, which of late has looked virtually unstoppable. Since her strong performance in the Oct. 13 Democratic presidential debate, fate has smiled on the Clinton campaign. But that won't last forever…

What is the forecast over the next 3 weeks about the Canadian Dollar versus the Green back up or down ?