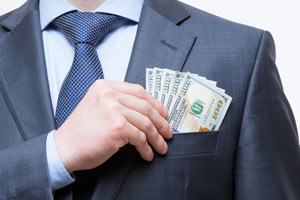 There are approximately 30 million businesses operating in the United States today, according to the most recent U.S. Census Bureau data.

You can bet some of those 30 million have got corporate scandals baking behind the scenes...

We found out last week that Valeant Pharmaceuticals International Inc. (NYSE: VRX) is almost certainly one of them.

Valeant was already under federal investigation in Massachusetts and New York for its drug-pricing practices. Then on Oct. 21, short seller Citron Research accused Valeant of fraud. It said the firm used Philidor Rx Services to create phantom sales by storing inventory and recording it as transactions. The questionable business practices sent VRX stock plummeting - shares lost 31% of their value in just five days.

"Wave after wave of bad news - now including allegations of outright criminal behavior - brought the shares down 40% in one morning, from $148 to below $89 yesterday," Money Morning Global Credit Strategist Michael Lewitt told readers on Oct. 22. "The shares eventually rebounded to $118, but not for any good reason."

Lewitt expects the troubled VRX stock to fall a lot farther before it craters.

"Valeant is getting what it deserves," Lewitt said. "Its predatory business model has enriched management and a bunch of hedge funds but has left everyone else with whom the company has come into contact severely damaged."

Valeant is just the latest discovery of corporate fraud in America.

Here are some of the biggest corporate scandals in U.S. history...

In the early 1980s, savings and loan associations (S&Ls) were deregulated. As a result, banks began to "take liberties" with investor money in dicey real estate deals and junk bonds. The companies were operating like banks - but without the regulations.

Lincoln Savings and Loan Association was at the heart of the crisis, with Charles H. Keating, Jr. at the helm. Prior to Keating's leadership, Lincoln was conservatively run. At the start of the decade, half its assets were in low-risk home loans, and only about a quarter of its assets were considered "at risk."

But Keating took over in 1984, and Lincoln's assets quickly grew from $1.1 billion to $5.5 billion in the four years that followed.

In 1989, the jig was up. Lincoln collapsed and cost the government - read: American taxpayers - more than $3 billion. Roughly 23,000 bondholders in Lincoln were defrauded, and many investors lost their life savings. In its last years, Lincoln employees had adopted the nasty system of encouraging customers to replace their federally insured certificates of deposit with uninsured, high-risk American Continental Corp. bonds. FDIC chair L. William Seidman later called the practice "one of the most heartless and cruel frauds in modern memory."

The Federal Home Loan Bank Board (FHLBB) launched what became a two-year investigation and sued Keating in a fraud and racketeering action for $1.1 billion. (Five U.S. Senators were also investigated, including John McCain (R-AZ) and four Democrats. They were accused of helping Keating on account of his political donations and became known as the Keating Five. Ultimately, they were sullied but legally cleared.)

In 1993, Keating was convicted on 73 counts of fraud and served four years in prison.

But the firm came under intense scrutiny after some serious "book cooking" in the early 2000s...

Turns out, WorldCom had been recording operating expenses as investments. By doing this, the company was able to offset costs of run-of-the-mill expenses like office supplies and travel. The pens, pencils, and paper WorldCom called "investments" accounted for more than $3.8 billion in expenses over five quarters. WorldCom also exaggerated profits in 2001. Its inflated assets totaled $11 billion.

The telecommunications giant was ultimately busted for stock market manipulation by its own internal auditing department in April 2002, which reported findings to the U.S. Securities and Exchange Commission.

On June 26, 2002, WorldCom fired Chief Financial Officer Scott Sullivan and began layoffs. Ultimately, the corporate fraud led to 30,000 lost jobs and $180 billion in losses for shareholders as WorldCom's stock price crashed from more than $60 per share to less than $0.20.

Like the Enron scandal, WorldCom spurred Congress to pass the Sarbanes-Oxley Act on July 30, 2002.

For six straight years prior to its namesake scandal, Enron was named "America's Most Innovative Company" by Fortune. Unfortunately for the investors who lost $74 billion (and the thousands who lost their jobs), Enron was too innovative when it came to its accounting records...

It all began in 1985, after two pipeline companies merged to form Enron Corp. Founder Kenneth Lay established the market for selling electricity. He successfully lobbied the U.S. Congress to deregulate the sale of natural gas. Lay also lobbied for - and was granted - government deregulation over his company's earnings reports.

With Enron's new "freedom to fudge," executives promptly set to cooking the books. First, they failed to report losses in order to keep investors interested in what seemed like a profitable company. Second, the financial officers concealed debts so that they didn't show up in the company's accounts. Lay and CEO Jeff Skilling used accounting loopholes and misappropriated investments to keep billions off the company's records.

Once America's seventh-biggest company, the Texas-based energy-trading giant declared bankruptcy on Dec. 2, 2001. It was one of the biggest bankruptcies in U.S. history. Enron stock crashed from $90 per share in mid-2000 to less than $1 by the end of November 2001.

Enron's corporate scandal led to the enactment of the Sarbanes-Oxley Act in 2002. "SOX" expanded the accuracy of financial reporting for public companies.

On Dec. 11, 2008, Bernard Madoff, New York money manager and former chairman of NASDAQ Stock Market Inc. (NDAQ), was turned into the authorities by his sons after he confessed to them his corporate fraud. Madoff's firm, Bernard L. Madoff Securities LLC, was declared an insolvent "giant Ponzi scheme" with estimated losses of $65 billion.

Madoff had provided investors with modest, steady returns, claiming to be making money by trading in Standard & Poor's 500 Index options. But really, investors were being paid returns out of their own money - or that of fellow investors - rather than actual profits. Madoff cleverly closed all positions prior to mandatory reporting dates so that stakeholders had no window into the fund's holdings.

Many forget that it wasn't just a bunch of individual "suckers" Madoff met at a country clubs who invested in his scheme. Charities - and numerous major hedge funds, such as HSBC Holdings Plc. (NYSE ADR: HSBC) and Banco Santander SA (NYSE ADR: STD) - lent billions to investors participating in the Madoff fund. These investments were secured only by holdings in a fund that ultimately turned insolvent.

In 2008, two of the largest American investment banks fell: The Bear Stearns Cos. and Lehman Brothers Holdings Inc. Lehman filed for Chapter 11 bankruptcy protection on Sept. 15, 2008 - to date, it's the largest bankruptcy in U.S. history with $613 billion in debts outstanding.

Dick Fuld, the "Gorilla" on Wall Street, was the man in charge. He'd gotten the company into large positions in subprime mortgages. It even made its own subprime loans. Lehman passed on that toxic debt by the billions to investors in the form of bonds.

Indeed, once Fuld's corporate scandal began to unravel, he failed to recognize his firm was in trouble and take steps to prevent it. He rejected offers from Warren Buffett and others to inject capital or merge. In a 2009 book titled "A Colossal Failure of Common Sense," author Larry McDonald (a former senior Lehman Brothers trader) said Fuld required the firm's chief risk officer to leave the boardroom during key discussions.

In the first half of 2008 alone, Lehman's share value dropped 73%, and the company was forced to sell off $6 billion in assets. It'll come as no surprise that Dick Fuld earned a spot on our list of the top 10 people to blame for the 2008 financial crisis...

Cold Words: Russian President Vladimir Putin has held office for 12 years and counting - longer than any other Soviet elected to the position. The extensive reign, combined with his enigmatic personality, means plenty of memorable Putin quotes have racked up over the years. Here are 15 of the most striking Putin quotes we'll never forget...