Wall Street is anxiously awaiting the Apple Q4 earnings, but not because it wants to know how many iPhones, Macs, and iPads the company sold in the last quarter. They know those numbers will be strong. 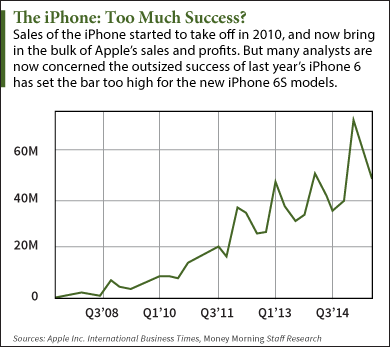 Analysts instead will focus on the guidance Apple Inc. (Nasdaq: AAPL) will give for the current quarter. That's because the current quarter – in recent years Apple's biggest – will tell investors how well the new iPhone 6S models are selling.

Although the iPhone 6S debuted in early September, it didn't go on sale until the end of the month. Only two days' worth of sales of the new models will be included in the Q4 AAPL earnings.

For the record, Wall Street forecasts that the Q4 Apple earnings will bring in profits of $1.88 a share on $51.1 billion in revenue. That would be a 32% increase in earnings per share (EPS) and a 21.4% increase in sales year over year. Sales of the iPhone are expected to rise to 48 million to 49 million units from 39.2 million in the year-ago quarter.

The iPhone is the primary focus of Apple earnings because it accounts for about two-thirds of the Cupertino, Calif.-based company's revenue and profits. Apple stock is up more than 600% since the original iPhone's June 2007 introduction.

Last Year's iPhone Will Boost Q4 Apple Earnings, but Then…

And last year's iPhone 6 was a stunning success. Huge sales delivered year-over-year growth numbers remarkable for a company of Apple's size. But it means that starting with the current quarter, sales of Apple's products will get compared with monster year-ago numbers.

Many analysts have already projected that iPhone sales growth will slow from about 35% in the 2015 fiscal year to the single digits in FY 2016.

"Sentiment [on Apple] has gone from glass half-full to glass half-empty in the last three months," FBR Capital Markets senior analyst Daniel Ives told International Business Times. "The Street wants to see a good quarter, but the big focus is on December guidance."

Anticipating a disappointing outlook, investors took a 3.26% bite out of AAPL stock on Monday, dropping the Apple stock price $3.88 to $115.20.

While the iPhone 6S isn't likely to post the 35% growth of its predecessor due to the large compare numbers, it should do a lot better than single digits.