The most anticipated earnings report of the season comes today when Apple Inc. (Nasdaq: AAPL) reports its fiscal Q4 results after the bell.

Our long-term outlook on Apple remains bullish. I see this stock going to $200 a share.

We'll hang on to AAPL and watch it grow. In the meantime, there are ways to score extra profits every quarter when earnings trigger short-term moves in Apple's share price. Last quarter, for example, my Money Calendar Alert members made as much as 175% on AAPL stock in the 11 days it took shareholders to book just 2.46%.

I spot these opportunities by studying price patterns before and after earnings reports. The best part is, with the right strategy, it doesn't matter which way the stock moves, just that it moves.

And from what my charts show me today, this is the perfect way to trade Apple at earnings time…

While many options strategies are directional – relying on the underlying stock to go either up or down to be successful – some are non-directional. They just need the share price to move to pay off for the trader.

That's why earnings season is the best time of year for traders; reports trigger short-term jumps and dips in share price. And my option analysis tools can tell me a great deal of information about the behavior of stocks before and after their earnings over the last four quarters.

For Apple, Q4 earnings typically aren't the most interesting. They come out before the big holiday sales quarter, which is why January's Q1 report is the company's biggest.

But today's earnings report could have a bigger impact on AAPL stock than the usual Q4 release, as it will really give us an idea of what the consumer was thinking during the China crisis last month.

You see, not that long ago, there were concerns that China was going to put a dent in Apple's year-over-year growth potential.

In October, overall market sentiment and seasonal forces took over and pushed AAPL – and the majority of stocks – up above September highs. Friday was the real breakout day for Apple, as it stabbed above the resistance level of $117 to close at $119.08. Now AAPL has a chance to make it back to the July highs of $132.50.

This volatility is evident in Apple's chart – it's a tough one to read when it comes to price, unless you are looking at the week prior to earnings announcements…

A look at this year's AAPL chart shows how price and volatility rise into earnings: 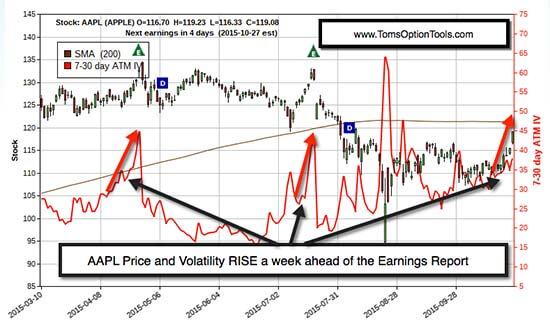 In April, AAPL rose 10 points the week ahead of the company's earnings report, and volatility about 15.  In July, it was about the same.

AAPL rose about 10 points once again before trading started Monday. But volatility has hardly budged. I believe the stock was just waiting for options traders to kick in their bets yesterday and today.

Tom I dont get it if I do an in the money call at the same time that I do a in the money put. At the same level, I'll make no profit. Should I change brooker????? Could you ilustrate this?

How come we never saw an updates on that busted Pandora put trade? That thing just kept rising, even into the August swoon.

Do we just forget about the dogs and act as if they never happened, and only ballyhoo the wins. That doesn't seem quite right, does it?

Sorry to say guys, but you know what the main purpose of this article is? It is for you to find it interesting and READ IT. That's how newspapers make money remember. The recommandition for what to trade on…well short sum up- do not rely on articles like this. The AAPL stock is moving up today, but it was absolutely not taken for granted, so please be careful. (and btw I have a MSc in B&E and have quite some trading experience)

Don't worry. I read these things for amusement and to get a sense of what the trades du jour are in the minds of the whippet traders in the casino.

And I'm NOT amused when touts are offered for trades turn out to be 100% losses and nothing is ever said about them again, leaving the impression that a) trading long options is easy and profitable and that b) this guy has a good track record.

He may. He may not, but trading long options … being the buyer instead of the seller is a fool's game for all but the very best and THEY better have strong adrenal glands. And while the readers attracted by these come ons may be smart, they're also mostly unsophisticated and inexperienced. Sheep to the slaughter.

Send me an email
Osman_1986@hotmail.com

Why all of the negative comments…no one said anything about making any money….and why not just buy a "leap" on Apple? You know its going up???

Yeah, and Pandora was just as surely going down. He made a good case too.