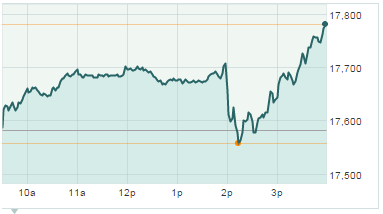 The Dow Jones Industrial Average today (Wednesday) gained 198 points as investors parse through today's FOMC statement to gain insight on when the central bank might increase interest rates. The U.S. Federal Reserve left interest rates untouched during its seventh meeting this year, but left open the possibility that monetary policy makers may hike the benchmark rate in December.

Shares of Goldman Sachs Group Inc. (NYSE: GS) added more than 2.7% and provided the biggest boost to the Dow and S&P 500. Meanwhile, shares of Apple Inc. (Nasdaq: AAPL) added another 4% on the day after the company reported the single largest yearly profit of any company in the history of the markets.