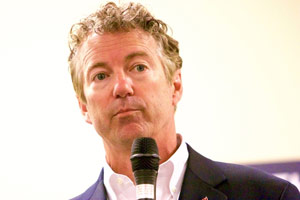 But largely since its release, the Rand Paul tax plan has fallen away from public attention.

That changed on Wednesday night. The third Republican debate brought Paul's tax plan back into focus in what was considered by many a shining (albeit quick) moment for the senator of Kentucky.

"My [tax] plan is unique in that I'm getting rid of payroll taxes," he said. Paul went on to argue that his plan was fairer because payroll taxes bite more heavily into the middle class.

In the middle of Paul's diatribe, fellow presidential hopeful Sen. Ted Cruz (R-TX) chimed in with praise. It is, according to Sen. Cruz, a good plan.

So what does Rand Paul's tax plan entail, exactly?

Let's have a look at the candidate's tax code proposal and what makes it - to some, at least - "exotic"...

"The left will argue that the plan is a tax cut for the wealthy. But most of the loopholes in the tax code were designed by the rich and politically connected," Paul wrote. "Though the rich will pay a lower rate along with everyone else, they won't have special provisions to avoid paying lower than 14.5%."

According to the right-leaning, non-partisan think tank Tax Foundation - whose evaluations were brought up several times in the GOP debate last night - Paul's plan has its pros and cons.

On the negative side, it would end in a $1 trillion revenue loss over the course of 10 years. Paul's column said he would make up for the cost of the tax cut by reducing government spending, although his column didn't detail what would be cut.

On the positive side, the 14.5% tax would increase the incentive to work and result in 1.55 private business hours of work. That is equivalent to 1.4 million full-time jobs.

I Can't Hear Over All That Yellen: We have a Federal Reserve lack of transparency problem. No one is exactly sure what the Fed is trying to do or say. This can cause a lot of volatility in the markets. Here are the two major factors contributing to this problematic communication breakdown...

Seems to me $50,000 is perhaps a little low for a family of four or less not to have to pay any taxes. Considering how the cost of living has gone up so much on just about everything. Probably $60,000 would be a better amount without having to pay any taxes on that amount.