Meanwhile, an unlikely economic force is growing - it out-earned China's economy by 40% in 2014 alone...

The "global female economy" - that is, the amount of money earned by women worldwide - came in at $15 trillion last year, according to US Trust. It crushed China's GDP growth rate by 40%, making the female economy larger than any country's other than that of the United States. 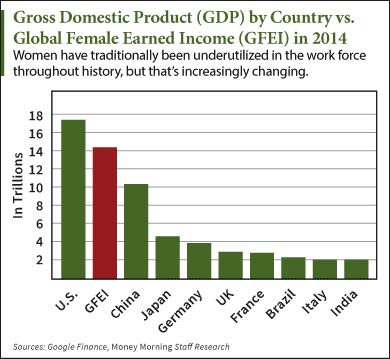 "Well of course," you might say. "Women make up half the world's population. It's not fair to compare their output to that of a single nation's."

Right now, women globally only have a 50% labor participation rate, compared to the 80% to 90% male rate (according to 2014 data, which is the most recent available). That's actually an improvement on 47% the year before. It also means there's a lot more room for improvement...

And when women work, economies grow.

If education, childcare, the wage gap, and other issues that hold women back from the entering the workforce were to improve globally, massive economic potential would be let loose:

Social Security's COLA Math Is a Joke: The Cost of Living Adjustment is meant to ensure that Social Security checks keep pace with inflation. Yet seniors have seen a 74% increase in expenses since 2000 while benefits have risen just 43%. The problem is how this measure is calculated...