A theme so far this earnings season is U.S. companies warning of an economic slowdown. With about half of the S&P 500 companies having reported already, many are citing protracted declines in production, sales, and employment that will track into 2016.

The press is treating this as a surprise, yet I'm hard-pressed to understand how…

We've been talking about the decline in revenue and earnings for more than a year and prepared accordingly. I've shown readers how to move your money into the best quality companies and simultaneously tighten up your risk management controls – often at a profit.
But what's becoming more clear from this earnings trend is just how much the Federal Reserve's misguided policies have hurt the U.S. consumer – and how that will affect company revenue and share prices.

Why Earnings Will Continue to Fall

So far this quarter just 41.5% of companies reporting have beaten quarterly revenue estimates. That's down from more than 70% in late 2009. 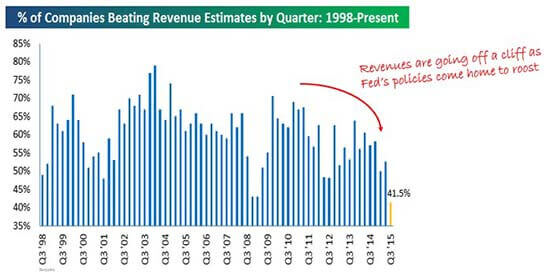 Earnings is the much more common stat to focus on for the simple reason that talking about the 77% of companies that have beaten earnings estimates so far this season is more palatable.

The problem – and what everybody is missing – is that you can fudge earnings. Any decent CFO can swing them by a few percent by drawing on reserves or using special accounting tricks or simple hedges.

But you cannot fudge top line numbers. Either you've got the sales or you don't.

The last time we saw four consecutive negative quarters of revenue was 2008-2009. Falling revenue tells me one thing: Consumers cannot afford to pay up for the inflation the Fed thinks is so important.

This is a scathing indictment of the Fed's policy; the middle class is being eviscerated. You have Middle America household wealth going down, people making less money, and people with less savings to begin with…

So companies are turning to serious discounting as a means of moving merchandise. That, in turn, causes profits to fall.

More than 100 million Americans shop at Wal-Mart weekly, so that dramatic drop in earnings projections tells me that the middle class is in more trouble than previously acknowledged. The recovery Washington thinks is moving along is actually shifting into reverse.

The troubled consumer/retail discounts/lower profits chain is a vicious cycle. For investors, it speaks to why we will continue to avoid consumer discretionary stocks for the foreseeable future.

This may take the press by surprise, but you can be prepared for slow earnings over the next few quarters. Continue to build defensive positions in companies selling "must have" products the world cannot live without.

Nice to look at. Nice to hold, but the smaller investor has no chance to play these behemoths unless you can give some options plays at opportune dates/events through the year.

Hello Jim and thanks for posting.

Don't forget that you can buy partial lots, meaning fewer than 100 shares at a time. Even a single share can help get you going.

Good analysis of the current situation.

And yes, offense … uh, I mean "defense" … stocks will continue to do well.

You could have also mentioned that Congress has sold out for the umpteenth time and resurrected the Ex-Im Bank … the Bank of Boeing. That will be so nice for them.

So, it's more government business "partnership " … other wise known as corporatism. Corporatism was Mussolini's preferred term. Some call it fascism. Yippee! We should be so proud.

And yeah, it's a sure thing betting on businesses that control the flow of government contracts and financing schemes. That strategy will play as long as the government and its "partners" can keep conning and fleecing the people … which ain't hard to do.

Let's try actual capitalism … you know where companies actually have to make stuff people in the private sector want to own … arrange financing on their own … actually compete without being granted monopoly status or lavished with contracts via lobbying … and are actually allowed to fail.

I bought Northrop instead in hopes that they would win the Bomber and they did. On top of that they reported an excellent qtr. NOC has many of the same qualities as Raytheon.

Thanks for the kind words. Your points are all exceptionally well made, as always Fallingman.

If I have $10K to invest, and you say I shouldn't invest anymore than 2% of the total on any one stock, how much do I need to buy to make sense and have it be worthwhile? The cost of the shares won't allow me to buy anymore than 5 shares or so.

He's not allowed to give you individual advice, but here's the generic answer he could and probably would give you.

It makes no sense to split up a small amount between several individual stocks.

Buy an ETF … or no-load mutual fund … that gives you instant diversification via the basket of stocks they own.

If you want to target a sector like the war profiteers, you can buy an Aerospace and Defense ETF … ITA, PAA or XAR. If you want to diversify between sectors, pick one or two or three more and split your $10K between 'em … and then hope like hell the market doesn't meltdown and the ETFs go no bid … suffering 40%+ haircuts … like several Index funds did on that 1090 down open in the Dow in August.

Be careful. This isn't a market anymore. It's a casino … and it's rigged. Puffed up with phunny money and lies.

Thanks for jumping in, Fallingman. It's fabulous when everybody helps each other!

And, you are correct…that is what I would suggest. An ETF or a fund in this instance will allow an investor with less money to put to work the opportunity to blend a larger grouping of holdings for much larger potential gains.

You need to supply your email to get the rest of the story. And you can read all of the content on Money Morning for free!

Where is the information about Digital Infrastructure Technology, you know the company that Donald Trump and his friends are investigating so much money on there stocks. 57 trillion dollars worth. Thank You

For a self-absorbed escapist generation of consumers, the Internet has become their "world", their reality. Not geopolitics, not elections, not domestic public policy or even current events. Gossip, Facebook, and online games are the new draw for millions of millineals. So, its addictive and therefore, becoming a must-have or essential need, not just a want. So, the stock keeps going up and will be a potential Google at some point.

In the new economy ("New Normal") of perennially near zero interest rates, its much more profitable to go to the Wall Street Casino and buy some chips. All your friends are their. Socialization Dude.