For Oct. 30, 2015, here's the top stock market news and stocks to watch based on today's market moves… 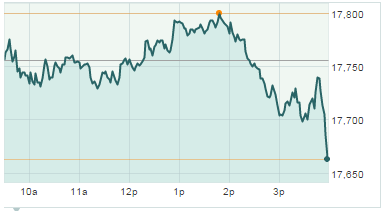 The Dow Jones Industrial Average today (Friday) dipped 92 points as traders reacted to mixed earnings reports. The S&P 500 was on track for the best month in four years, as markets largely pushed aside concerns about the global economy, remained optimistic the Fed won't hike rates in 2015, and reacted favorably to loose monetary policy from central banks around the globe.

Today's top performing sector was energy, as shares of Chevron Corp. (NYSE: CVX) and Exxon Mobil Corp. (NYSE: XOM) were both up 2% at one point during the trading session before paring gains. Oil prices gained during Friday's trading session. December WTI oil prices jumped 0.7% to hit $46.39 per barrel, while Brent crude prices added 1.2% to hit $49.39.