For Nov. 2, 2015, here's the top stock market news and stocks to watch based on today's market moves… 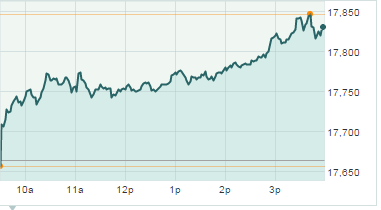 The Dow Jones Industrial Average today (Monday) added 165 points to turn positive for 2015 after optimism increased due to positive manufacturing data from around the globe. Although the U.S. manufacturing index sunk to a two-and-a-half-year low, markets were positive thanks to a report indicating manufacturing orders were on the rise. Meanwhile, the Nasdaq hit a 15-year high as healthcare stocks surged thanks to increased merger and acquisition activity. In addition, shares of Apple Inc. (Nasdaq: AAPL) added more than 1% while the iShares Nasdaq Biotechnology ETF (Nasdaq: IBB) gained more than 3.5%

The Atlanta Federal Reserve Bank released a private report on U.S. manufacturing this morning and predicts the U.S. economy will grow at 1.9% in the fourth quarter, a sluggish figure. It’s lower than previous estimates of 2.5% growth.