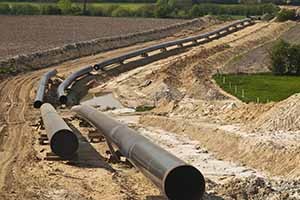 The fate of the Keystone XL pipeline got even cloudier yesterday (Monday) when TransCanada Corp. (NYSE: TRP), the company that wants to build it, asked the U.S. Department of State to suspend its permit application.

TransCanada needs a permit from the State Department because the Keystone pipeline crosses an international border. The company first applied for the permit in 2008.

The planned 1,179-mile pipeline would transport tar sands oil from Alberta, Canada to Nebraska, where it would connect with an existing pipeline. Ultimately, the Alberta oil would end up in U.S. Gulf Coast refineries.

In the United States, the Keystone oil pipeline has become a political battleground. Liberals have opposed it as damaging to the environment. Conservatives have supported it as a job-creating project that would contribute to the nation's energy independence.

Lately the liberals have been winning. A bill to approve the Keystone XL pipeline was defeated in the Senate in 2014. And after years of waffling on the issue, President Barack Obama has over the past year hinted that he would reject it following the completion of the State Department's review.

A negative recommendation from the State Department was expected as early as this week, according to The Wall Street Journal.

That may have prompted TransCanada to request the suspension. A long delay could postpone the decision until after the 2016 election - when a Keystone-friendly Republican might occupy the White House. A Democratic victory would spoil the strategy, as both Hillary Clinton and Bernie Sanders oppose the Keystone XL pipeline.

The State Department said it is considering TransCanada's request but does not have to honor it.

But let's step back a minute. For all the fiery rhetoric in Washington, does the fate of the Keystone pipeline - one way or the other - make that much of a difference?

Most of what really matters in the Keystone debate rarely gets discussed. Here's what you need to know...

Would you please not call Alberta oil sands tar sands it is old terminology and out of date it is now referred to as Oil sands the oil is trapped in the sand. Thank you sincerely David Embury

In fact, to those of us that live in Alberta the term tar sands is viewed as inflammatory, derogatory and offensive. It is generally used only by the uneducated or politically motivated. Either way, when I see the term tar sands great credibility is lost.

Thanks for reading Money Morning. I was unaware the term "tar sands" had any negative connotation. I have seen it used interchangeably with "oil sands." Apparently the distinction hasn't migrated south of the border. I will bear it in mind for the future, however.

Commodity prices especially natural gas baffles me. We are now witnessing NG priced at an all time low, below $2, as it was in 2008. Yet, with such a rich supply (PA & WV), yet again our nation and royalty holders go bust? How can NG with it's surpassed usage of coal, in generating electricity, become so deflated? Why would gas drilling companies purchase mineral rights, build a well, drill/ frack, if the infrastructure was inadequate to transport/ sale their product? So many things fail to make sense within these markets! Can any answers or insight be generated to cast more insight on this issue?

Suncor energy has been bought by chinese interests and they bought the Shell refining facilities in east-Montreal to store and refine crude. the next move is to send the end product by the 9B existing pipeline alongside the Saint-Lawrence river. In order to do so, they will reverse the flow to provide Chinese ULCC to fill-up. Although the environmentalists are screaming blue murder, the project will probably go on unnoticed, for the consortium is paying heavy money to go ahead on this issue. So be it for now having problems with the XL, but it will go ahead anyhow. You tell me…

Do not worry! Canada will stay a colony of the US economically. The global warming people will continue to screw themselves.

The reason that "tar sands" should not be used it that it is simply "Incorrect".
The oil here, in the Alberta "Oil Sands", is naturally occurring.
It oozes out of the ground and can be seen along certain untouched sections of streams and riverbanks, among other places.
(If one can remember back to the day of the old "Beverly Hillbillies" TV show opening scenes, Jed Clampett simply shot his gun and oil oozed out of the ground.)
Tar is a man-made compound often used to patch a roof or pavement.
Therefore, using the term "tar sands" holds no credibility here. Worse, it paints the user in a left-leaning light.
The reclamation work being done here leaves the land cleaner than it started. Everyone interested should make the opportunity to come here with an open mind and see this for themselves.