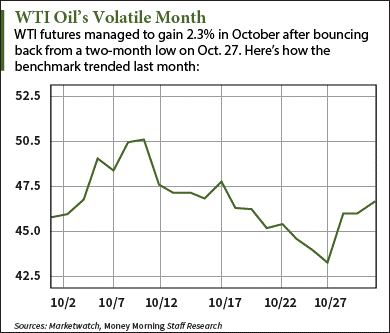 Brent crude oil prices saw the same gains this morning. The global benchmark ticked up 1.6% to $49.55 a barrel. Futures gained 1% in October and are down 24.3% so far this year.

Despite shortages overseas, investors worry the growing U.S. supply glut will send prices lower over the long term. According to the U.S. Energy Information Administration (EIA), U.S. inventories increased by 3.4 million barrels during the week ended Oct. 23. That puts total U.S. supply at an 80-year high of 480 million barrels.

All you need to do is follow these three tips for picking the most profitable oil stocks...