For Nov. 5, 2015, here's the top stock market news and stocks to watch based on today's market moves… 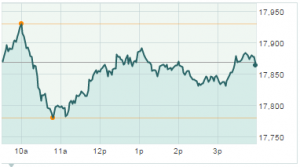 The Dow Jones Industrial Average today (Thursday) was off four points as the markets prepare for Friday's unemployment report for the month of October.  Markets were slightly weighed down by mixed earnings reports, including dismal quarterly figures from chipmaker Qualcomm Inc. (Nasdaq: QCOM). This morning, the U.S. Department of Labor reported the number of Americans applying for unemployment benefits increased by 16,000 to 276,000. That figure is the highest in two months and was higher than economists had anticipated.