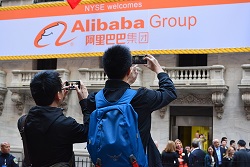 Youku is known as the "Chinese YouTube" and boasts 580 million users, according to digital marketing company DMR.

Alibaba has recently ramped up its efforts to become a go-to source for video and other media content. It rolled out its paid video subscription service TBO in a beta launch in September.

And the move is more than just a play to dominate the video market in China...

The Youku acquisition is just a small part of Chairman Jack Ma's plan for future success. As Money Morning Executive Editor Bill Patalon puts it, "It's a 'transformational' type of company, meaning its leaders are 'planting seeds' right now that will have big future payoffs."

Alibaba reported year-over-year revenue growth of 32% on Oct. 27 in its quarterly earnings report. Gross merchandise volume was up 28% from the previous year.

And that's part of the reason Patalon refers to BABA as a "legacy" stock...