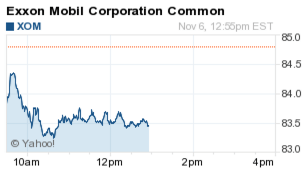 Exxon Mobil Corp. (NYSE: XOM) is being probed by the New York attorney general for allegedly shielding the risks of climate change from its investors. The Exxon Mobil stock price is down 1.53% today to $83.49.

Over the past decade, Exxon has published research consistent with mainstream beliefs about climate change. Yet, investigators believe there might be inconsistency between Exxon's research and its statements to investors.

So far, Exxon hasn't issued a formal response about the federal investigation.

In the past, Exxon has also weathered media scrutiny about continuing to fund groups that are skeptical of climate change, such as the Heritage Foundation and the National Center for Policy Analysis.

All historical evidence points to Exxon stock being able to shake off the investigation.

Stay tuned to Money Morning to see how Exxon's stock will be affected as the climate change investigation unfolds and oil prices continue to hover around $50.