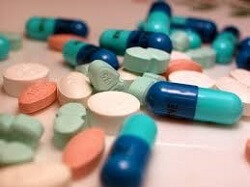 Ackman's hedge fund, Pershing Square, is a key VRX shareholder. At one point, Pershing had a fifth of its holdings in Valeant. The firm and its investors have lost roughly $2.3 billion since taking a 6% stake in Valeant earlier this year.

Ackman has stood by the company and Pearson even as controversy over Valeant's drug pricing, distribution policies, and relationship with specialty pharmacy Philidor Rx escalated. However, Ackman expressed doubts Thursday in a front page Wall Street Journal article about whether Pearson has the ability to navigate the political and public relationship challenges plaguing Valeant.

But by Thursday afternoon, Ackman had changed his tune and reaffirmed his confidence in Pearson. He called him "one of the most shareholder-oriented CEOs I know." It was the second time in a week that Ackman voiced support for the beleaguered CEO.

And as was case with the first time, Ackman's support did little to stave off a sell-off in the Valeant stock price.

More bad news for Valeant came Thursday when Goldman Sachs sold 1.3 million shares of VRX. In April 2014, Pearson pledged 2 million shares to Goldman in exchange for a $100 million loan. At the time of the loan, the VRX stock price was around $206.

With the reputation of VRX's management tainted and investigations into the company mounting, the VRX stock price likely has further to fall…

Lewitt is wrong.. Using his 66% model VRX would have only had to have 1 billion in sales 5 years ago to reach 12 billion in slaes last year. Oh, wait…they are not even at 12 billion in sales. Why I guess bausch and lomb, salix and all the other companies. This guy does not even know what specialty pharmas do. It is odd nobody is talking about insurance companies profits, when all they want to do switch patients to the absolute cheapest generic. PBN's make it very difficult for doctors/hospitals to prescribe the actual drug they would like to… Read more »