Stock buybacks have hit record levels - but what's driving the growth is dangerous for you and our economy.

Total stock buybacks for 2014 amounted to $696 billion, or 4% of U.S. gross domestic product (GDP), according to Research Affiliates. That's a lot spent on a practice that used to be tightly regulated by the U.S. Securities and Exchange Commission because it was considered manipulative.

And buybacks are manipulative. They make sense for some companies, but now they're often used to inflate stock prices – and make executives rich.

The truth is, most of today's stock buybacks are not only unproductive for the long-term health of corporations, but destructive in terms of economic growth.

Here's how bad the stock buyback "con game" has become - and how we can fix it...

Companies used to not be allowed to buy back their shares in the open market. The Securities Exchange Act of 1934 implied large-scale stock repurchases by a company could be construed as an attempt to manipulate its stock price.

Newly appointed SEC Chairman John S.R. Shad, a former vice chairman of E.F. Hutton & Co. who sat on 17 corporate boards, pushed through Rule 10b-18. This rule gives companies a "safe harbor" for buying back shares, meaning manipulation charges would not be filed if they followed certain purchase guidelines.

Now, not all stock repurchase programs are bad. They make sense if a corporation's earnings history is steady, if its future earnings prospects are good, and if its share price is currently undervalued.

The cost of buybacks should be weighed against a company's free cash flow (FCF). You find that by taking operating cash flow minus capital expenditures from fixed assets and cash dividends paid.

Apple Inc. (Nasdaq: AAPL) is a good example of a company that can justify massive buyback programs.

Apple has repurchased $56 billion of its own stock in the past 12 months. Even after that, Apple is still sitting on over $200 billion in cash. It has also raised its dividend out of its increasing free cash flow and spent $7 billion on capital expenditures in 2014.

Apple can easily argue its stock is undervalued since it's trading at a trailing price/earnings multiple of about 13.2. Competitors trade at much higher multiples. Google, now known as Alphabet Inc. (Nasdaq: GOOGL), trades at a PE of 35.7. The market trades at about 18.5.

But now companies repurchase shares because they're unable to organically grow earnings by reinvesting cash back into the business. When managers see declining return on capital from operations, or when they see no worthwhile mergers or acquisitions to grow core business lines, they turn to buybacks. They can financially engineer higher earnings per share without boosting gross earnings or net income.

Looking at their cash flow shows the unhealthy consequence of buying back too much stock...

This Ratio Is Creeping to a Dangerous Level

Since 2004, U.S. corporations have bought back more than $7 trillion worth of stock, according to the Academic Industry Research Network. The trend has accelerated over the past few years. 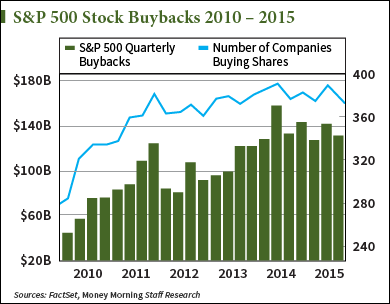 In just the second quarter of 2015, stock buyback value hit $134.4 billion, according to FactSet. For the trailing 12-month period buyback value totaled $555.5 billion.

The total buyback amounts are staggering - and what's more worrisome is where the money is coming to pay for them...

As free cash flow has been falling, the buybacks-to-free-cash-flow ratio has been rising.

What's worse is when the dollar amount of buybacks exceeds a company's free cash flow, like it has lately, debt is issued to keep the buying binges humming along. And some corporations are going into serious debt to finance their stock buybacks.

According to The Wall Street Journal, in the first nine months of 2015, U.S. corporations issued $1.2 trillion of debt. Proceeds from some of the largest issuers, including Microsoft Corp. (Nasdaq: MSFT), Qualcomm Inc. (Nasdaq: QCOM), and Oracle Corp. (NYSE: ORCL), were "earmarked for share repurchases and dividends."

But buybacks are no guarantee that bid-up share prices will stay up...

Last year International Business Machines Corp. (NYSE: IBM) spent almost $20 million in buybacks when its stock was around $190. And whatever IBM spent in 2015 has been a total waste of money. Its stock is trading around $138 now.

And since companies are wasting billions on buybacks in the later stages of an extraordinary bull market, they pay increasingly higher prices for their shares.

This is money that could go to employees and to business growth. Instead, it drives only short-term gains. This at a time when economic growth has been averaging an anemic 2.4% and most of the employment gains have been part-time and low-wage jobs.

But they continue because of who is benefiting the most from record-high stock buybacks...

What about reducing share count so that you are now paying out less in dividends. Now the dividend can be raise without affecting payout ratio.

In search of short term profit and dividends Wall Street has led US companies down a blind alley.

They have frowned on long term investment and R&D as these dent short term profits and dividends.

They prefer layoffs, asset stripping and mergers and acquisitions to boost short term profit and dividends.

Companies that once issued stock to grow now take on debt to buy back their shares that increase the share price and dividends for the other share holders.

Increasing stock was always much better than debt for investment. With stock you pay dividends depending on how well the company is doing and it doesn’t drain the company in the bad times. Debt repayments stay the same good times and bad.

Wall Street has strip mined the real companies of the US economy and left them in no position to grow without long term investment and R&D.

The UK was the last super power and China will be the next.

To see how bad it is read Michael Hudson's book "Killing the Host".

I would propose one additional tax code modification.

Since many large companies participating in this "scam" have large amounts of overseas cash, they are borrowing to buy back their stock instead of repatriating these funds. Congress has to come up with a way for these funds to be repatriated, either tax-free or at a reduced rate (since the business already paid taxes where they were earned).

Almost everything else proposed I can also agree with. The one portion I would reject would be having academic economists on corporate boards as a standardized idea. Most of the ones I have experience with are worse than dead wood, and few bring any independence of thought to their teachings. I can foresee too much lopsidedness in the ideas that would be generated, that I don't anticipate good results from that proposal.

the number of shares out is not significantly reduced because new shares are issued to the board & executives in form of compensation and in stock options. The float to the public remains same. Its a con game. The executives win because they have inside information. Its time the owners take charge.

Good stuff Shah BUT "Academic economists and labor representatives" NO! Academics & Labor Reps have this insidious habit of turning everything into politics!

The chances of this happening are about as good as congress passing a law that congress cannot pass any law that does not apply to them also, or a law against legislative bribery, otherwise known to us as "Campaign Contributions." The fix is already in with the supreme court, otherwise a corporation would not be a "person" and super PAC money would not be "free speech".

Quantitative Easing for the People is the most effective way of solving this problem- and many more!

Shah, thanks for a great analysis. I think reinvestment is such an important driver to increase benefits to all the firm's employees, that any buybacks should be limited to say, 10%, of current profits, disallowed entirely when based on borrowed money, and internal investment incentivized by a stronger investment tax credit.