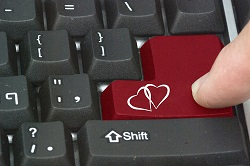 The Match.com IPO price range was set at $12 to $14 a share this morning. The company has also announced it will list on the Nasdaq under the ticker "MTCH."

The deal is one of the most talked-about IPOs of the year. Match Group Inc. (Nasdaq: MTCH) is going public at a time when the online dating market is booming. Currently, the company targets a growing demographic of about 511 million people.

With the Match.com IPO price range officially announced, here's a comprehensive breakdown of the deal - including whether or not you should invest in MTCH stock when it hits the market...

When is the Match.com IPO date?

Shares of Match Group will price during the week of Nov. 16. MTCH stock will start trading the morning after the IPO prices.

How much money will the Match.com IPO raise?

According to Renaissance Capital, a manager of IPO-focused ETFs, the company will sell 33.3 million shares. At the high end of the Match.com IPO price range, the deal will generate $433 million.

The deal is a spin-off of IAC/InterActiveCorp (Nasdaq: IACI), which owns a number of websites, including Vimeo and The Daily Beast. Following the IPO, IAC will own all outstanding shares of Class B stock. That means IAC will have the most voting power on matters like the election of board members and dividend policy.

Who are the Match.com IPO underwriters?

What is the Match.com valuation?

What kind of company is Match Group?

Match Group is the largest division of IAC and owns 45 dating and educational services. These include Match.com, Tinder, OkCupid, The Princeton Review, and Tutor.com. Since 2009, Match has acquired 25 different brands for a total cost of $1.3 billion. It plans to close its $575 million acquisition of dating site Plenty of Fish by the end of the year.

As the largest online dating conglomerate in the United States, the company will keep targeting a burgeoning demographic. According to its IPO filing, Match targets "adults in North America, Western Europe and other select countries around the world who are not in a committed relationship and who have access to the Internet." As of Sept. 30, Match's dating sites attract 59 million monthly active users and 4.7 million paid members.

Match Group is also expanding its mobile customer base. The company reported 68% of new registrations came from a mobile device during the first half of 2015.

"We are currently allocating resources to more rapidly increase our mobile development, which we believe represents a significant growth opportunity for our business," the Match.com IPO filing stated.

How much money does Match.com make? 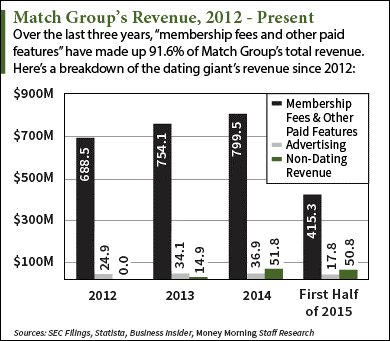 Despite its profitability, the company said it doesn't expect to pay dividends anytime soon. It will instead use earnings to grow the company. An undisclosed portion of the IPO proceeds will be used to pay back debt owed to IAC.

What are the risks of the Match.com IPO?

One risk is how other online dating companies have struggled to find success on Wall Street recently. Momo stock is down 16% in the last three months. San Francisco-based dating platform Zoosk scrapped its IPO plans back in May due to "unfavorable market conditions."

But the most important risk for the company is its defense against cyberattacks...

"We are frequently under attack by perpetrators of random or targeted malicious technology-related events," the IPO filing said.

Now that we know all the details of the Match.com IPO, the biggest question is...

Should I buy Match.com stock?