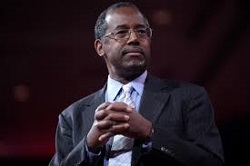 More and more Ben Carson scandals are coming to light. Whether any of them are true is for you to decide...

Last week, Carson battled the media over the factual accuracy of three anecdotes he'd told in his own books.

The lauded Johns Hopkins neurosurgeon is under such increased scrutiny because his popularity is quickly rising. A new poll from Monmouth University released Monday shows Carson eked ahead of rival GOP presidential favorite Donald Trump in South Carolina. Among South Carolina Republicans likely to vote in the February primary, Carson is now favored by 28% to Trump's 27%. The new poll also reflects a huge bump for Carson since August, when he was at 15% in the state and Trump was at 30%.

And according to an ABC News/Washington Post poll released earlier today, Carson is also now ahead of Trump on a national level too. Heading into tonight's fourth GOP presidential debate, 71% of Republicans see Carson favorably, while 69% feel the same about "The Donald."

So out come the smear campaigns.

Here's a look at the three biggest Ben Carson scandals in his campaign right now...

Do You Buy Any of These Ben Carson Scandals?

Ben Carson Scandal No. 1: He was not offered a full-ride scholarship to West Point. 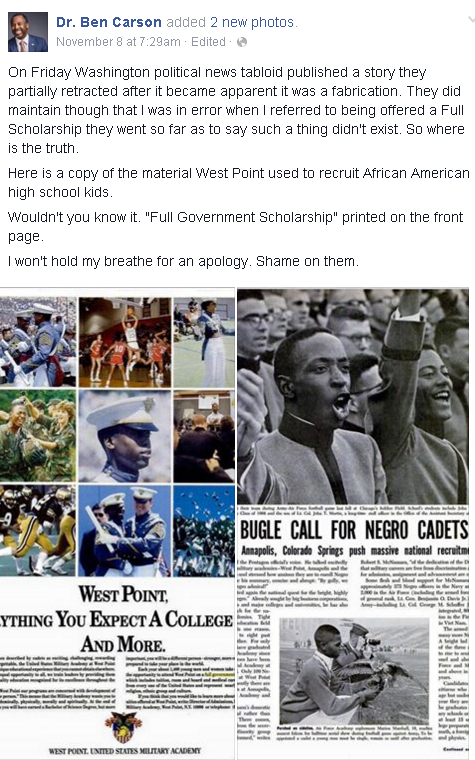 Ben Carson Scandal No. 2: He lied about an exam he took as an undergraduate that proved he was the "most honest man at Yale."

On Saturday a reporter with the Wall Street Journal published a story that my account of being the victim of a hoax at Yale where students were led to believe the exams they had just taken were destroyed and we needed to retake the exam was false. The reporter claimed that no evidence existed to back up my story. Even went so far as to say the class didn't exist.

Well here is the student newspaper account of the incident that occurred on January 14, 1970.

Will an apology be coming. I doubt it."

Ben Carson Scandal No. 3: He was not the angry, violent kid he claimed to be. 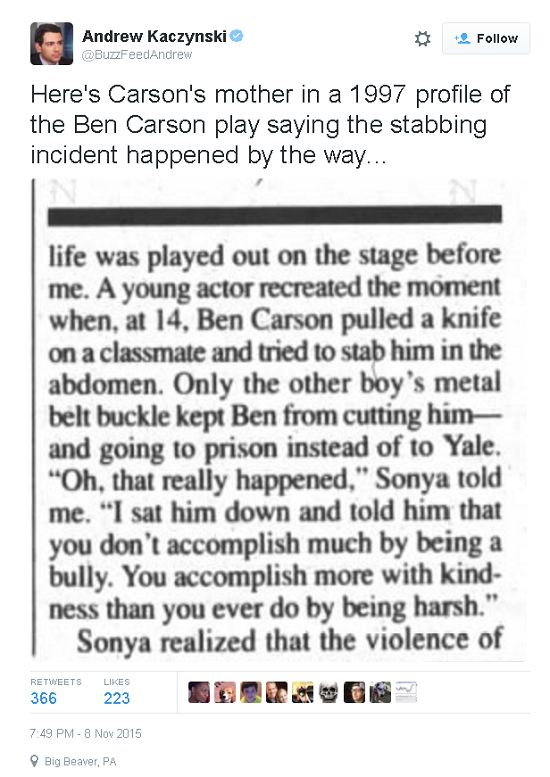 Draw Your Weapons... The smear campaigns have officially started and "election 2016" has garnered some serious search steam. So if you're looking for accurate information on issues like Carson's West Point debacle and Rubio's credit card scandal, look no further. We've done research for you. Here's more on those matters, along with other pertinent stories...

Loving the unraveling of the "Carson is a liar" smear campaign. There's a difference between vetting and maligning. Media Note: Do your research, find the facts, confirm, check, double-check, then post. If you don't have the story, don't post it. The shameful use of the media "bully pulpit" to put out accusations and innuendoes and sliming someone's character (without the facts to support the story) is journalistic malpractice at its worst.

Love that Dr Carson believes that a major problem in America requiring attention is… THE EVIL STOCK BUYBACK. Idiot.