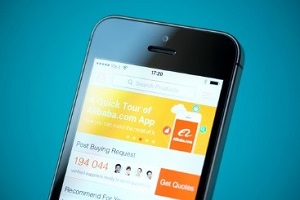 Alibaba Group Holding Ltd. (NYSE: BABA) stock is now up 37.2% since the start of October.

Alibaba announced that within the first eight minutes of Singles' Day, more than $1 billion had already been spent over its network of e-commerce sites. After 12 hours, nearly $9 billion had been spent. Alibaba officially reported $13 billion in gross merchandise volume (GMV) with one hour left in Singles' Day.

Each year on Nov. 11 (think 11/11), Chinese bachelors and bachelorettes celebrate their single lives. The holiday is popular with young people, who throw parties and shower themselves and each other with gifts.

Singles' Day began in 1993, but took off in 2009. That's when Alibaba began promoting the holiday.

And it's far surpassed its American counterpart, Cyber Monday. According to ComScore, Cyber Monday 2014 accounted for total sales of just $1.35 billion in the United States.

Alibaba Chairman and founder Jack Ma addressed some of the concerns Americans have with the Chinese economy, but said he believes a 7% growth rate in the country is achievable.

He also said that the country's Internet industry will be a significant driver of growth moving forward.

"We've got 300 million middle-class people, and we believe in the next 15 years ... a half billion people will be middle class, and the demand for high-quality products, high-quality services is huge," Ma told CNBC today.

That massive Internet audience is part of the reason we've been bullish on the Alibaba stock price throughout 2015. Here's why we continue to recommend long-term investors buy BABA stock...