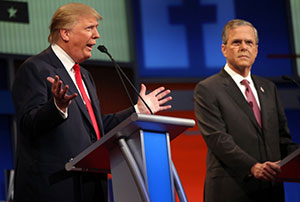 The candidates had a lot to prove during the fourth GOP debate, hosted by FOX Business last night. Eight Republican presidential hopefuls battled each other for more than two hours on economic issues.

So, who won the Republican debate?

It's widely being reported that Florida Sen. Marco Rubio came out on top. He effectively weaved compelling personal anecdotes into his policy discussions, retelling his family's immigration story during both his opening and closing statements to reiterate the idea of "the American Dream." The young senator lauded vocational training programs in his response to a question about raising the minimum wage. Rubio believes the United States could help its workers by making higher education more accessible. His answers drew cheers from the crowd.

But alongside Rubio's standout comments, each candidate shined on at least one occasion.

With no clear-cut "runaway" winner, the answer to the question of who won the GOP debate is really up for you to decide.

Here are each candidate's most memorable moments from last night's showdown…

Who Won the Republican Debate? A Look at the Candidates' Best Moments

More and More Ben Carson Scandals Are Coming to Light: But whether any are true… well, that's a different matter. Last week, Carson battled the media over the factual accuracy of three anecdotes he'd told in his own books. Are these accusations part of a massive smear campaign, or did the good doctor tell a few bad lies?