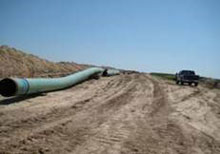 The Keystone pipeline near Swanton, Neb., in 2009.

The Keystone XL project has been a contentious topic for seven years - and counting...

Former U.S. President George W. Bush granted presidential permission for its construction on March 8, 2008. But the permit was revoked two years later under the Obama administration due to environmental concerns.

This February, Congress proposed another Keystone bill that would provide TransCanada Corp. (NYSE: TRP) - the company behind Keystone's construction - with a refreshed building permit. President Obama vetoed the proposal. He accused Congress of trying to circumnavigate necessary legislative steps for making such large-scale national decisions.

Then just this month on Nov. 6, Obama killed a second Congressional proposal, made in conjunction with TransCanada, for construction to begin. He said it would not serve in the public's best interest.

But the public might disagree with Obama's assessment. According to the University of Texas at Austin's Energy Poll taken in April (soon after Obama's first veto), 51% of those surveyed who were familiar with the pipeline supported it.

And for a good reason: A January 2014 Keystone XL Project executive summary released by the U.S. State Department found that the energy venture would result in significant economic growth, including 42,100 jobs and $3.4 billion (or approximately 0.2% of the U.S. GDP). Furthermore, the summary found that while the project would contribute to climate change, it would not contribute more so than any other alternative option for transporting oil.

Though the project is on hold right now, things might not be completely over for Keystone XL. On Monday, TransCanada said that it theoretically could resubmit its Keystone application in January 2017 - after the next presidential election.

In the meantime, the corporation could plan its next moves, as could the pro-pipeline members of Congress...

Here are two ways the Keystone XL project could be revived.

With China's increasing demand for crude, they'll surely pay big bucks to let the XL go on. After all, it's their company ( Suncor Energy ) that'll provide the crude to fill the pipeline. So, whatever concerns there may be now, it'll come back to full lenght operations, even if the environmentalists cry blue murder.