Silver prices today are hovering around $14.28 an ounce, down nearly 10% for the year. Silver linings have been hard to come by lately in this precious metal market.

On Nov. 11, the silver price had declined for 10 trading sessions, a rare event in the markets. The $4.5 billion iShares Silver Trust (NYSE Arca: SLV) has followed silver, also down for 10 straight days.

But interestingly, despite weakness in silver stocks, they have actually shown more resilience than silver itself over the past week.

And if we look at the fundamental demand side of the silver market, we see it's an area where there are encouraging signs for the silver price forecast...

According to research from Sentimentrader.com, silver has only declined in 10 straight trading sessions twice before, once in 2000 and again in 2008. In those cases, over the following few weeks, silver gained 4% and 30%, respectively.

Action in silver stocks has been encouraging, however, when compared to the silver price. Here's how the two compare if we look at the last week in trading: 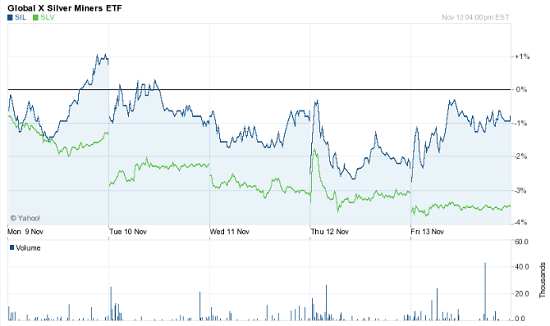 While the time frame is admittedly very short, it still begs the question whether silver stocks are potentially leading a possible turnaround in silver.

And on the fundamental demand side, some interesting news has come from the Silver Institute...

The silver prices are expected to grow 252% showing the behavior same as in 2008 reason being the physical shortage scarcity.

is Silver have high growth potential?