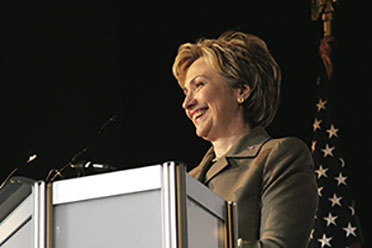 It all began when rival presidential hopeful Vermont Sen. Bernie Sanders took an opportunity to criticize the former secretary of state about her campaign contribution affiliations. Specifically, he criticized her for accepting millions from Wall Street donors.

Clinton was aghast that her political integrity was being called into question. It was at this point she probably should have admitted that, yes, Wall Street does give her money because they believe she’ll help them if she wins, but such bribery simply won’t work. The end.

Instead, Clinton gave CBS’s 8.5 million viewers a sinuous answer that did her campaign far more harm than good.

“Oh, wait a minute, senator,” Clinton shot back. “You know, not only do I have hundreds of thousands of donors, most of them small. And I’m very proud that for the first time a majority of my donors are women, 60%. So, I represented New York, and I represented New York on 9/11 when we were attacked. Where were we attacked? We were attacked in downtown Manhattan where Wall Street is. I did spend a whole lot of time and effort helping them rebuild. That was good for New York. It was good for the economy and it was a way to rebuke the terrorists who had attacked our country.”

This statement was Clinton’s obvious attempt to circumnavigate the truth. She and Wall Street have had a long-standing tryst, and there’s a lot of proof out there to support it…

For years, we have known there’s a relationship between Hillary Clinton and Wall Street. That it exists is no surprise.

The real question on many Americans’ minds is exactly how that relationship will play out should Hillary win the Oval Office.

Sanders picked up on this when he pointed out that a candidate can’t claim to work for Main Street when his or her campaign is massively fueled by Wall Street.

You see, both Sanders and Clinton are running populist campaigns.

But Sanders does not accept any super PAC or corporate donations.

Clinton, who claims she’ll “topple the 1%,” has, over the course of her career, garnered some $14 million in contributions from the financial industry. In fact, her 2016 presidential campaign alone shows the Hillary Clinton/Wall Street relationship is stronger than ever – she’s accepted $1.9 million from the financial sector so far.

Here’s the most recent data (as of Aug. 3) from OpenSecrets.org showing Clinton’s top career contributors…