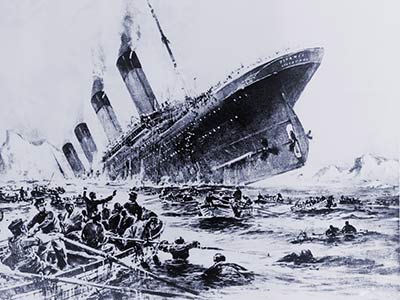 A depiction of the RMS Titanic as it sank into the cold depths of the Atlantic Ocean.

Those are the facts we all learned in history class and from the cinema.

It suggests that infamous plutocrat financiers, alongside members of a deviant Catholic priesthood, played a crucial role in the "unsinkable" vessel's fate.

And all for the sake of creating the U.S. Federal Reserve…

In 1910, seven men met on Jekyll Island just off the coast of Georgia. There, they planned the creation of the U.S. Federal Reserve Bank. They were:

For these "American dynasties," the creation of the Fed meant firsthand influence in the country's monetary policies.

Morgan's banking empire was already acting as a pseudo-central bank to the American government at the time. Twenty years prior to the Jekyll Island meeting, Morgan saved the country from a bank panic. He formed a syndicate to prop up money reserves with a shipment of $62 million worth of gold.

Morgan devised a plan to clandestinely repair the Olympic, swap it with the Titanic, and sink that ship for the money he felt he was owed.

The Rothschilds did the same. They acted as a syndicate to keep the American government propped up financially. The wealthy family had already financed and pioneered the industrialization of Europe. For them, the Federal Reserve meant an opportunity to exert such control in America.

(Sidenote: The Rothschilds were the banking agents for the Jesuit Order of Catholics that allegedly held "the key to wealth of the Roman Catholic Church." We'll get back to the Jesuits in just a moment…)

And then there were the oil giants, the Rockefellers, whose massive fortune already afforded them sway in several American institutions. The creation of the Fed, for them, meant maintaining that influence.

One operation Morgan owned was International Mercantile Marines, a trust he'd formed to monopolize trade routes. Therein, Morgan controlled the "White Star Line" – a maritime merchant company that operated exclusively within the Northern Atlantic trade routes. The White Star Line built the RMS Titanic and its sister ships, the Olympic and the Britannic.

In 1911, the Olympic experienced two major incidents at sea. One of these incidents involved the HMS Hawke off the Isle of Wight. As was customary at the time, the British Royal Navy's own team investigated the crash and found that the Olympic was at fault. Because of this ruling, insurance would not pay out to the White Star Line for the damages the ship incurred.

This didn't bode well with Morgan – and it's where our Titanic theory comes into play.

Morgan devised a plan to clandestinely repair the Olympic, swap it with the Titanic, and sink that ship for the money he felt he was owed.

Now, at the same time that all this maritime drama was going down, the Federal Reserve was in its conceptual phase. Opposition stirred as to the institution's establishment…