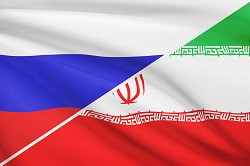 Somehow, only a few media outlets have caught wind of the unprecedented Russia-Iran oil deal that played out recently.

On Nov. 5, OilPrice.com reported that Iran's Deputy Petroleum Minister Amir Hossein Zamaninia had informed local media that representatives from Russian energy companies would be visiting the small OPEC country last week. The purpose was to strike an export deal – one that would grant Russia access to the world's largest, most competitive energy market: Asia.

Russia, you see, has a long-standing "high-profile observing delegation at the OPEC headquarters," noted Moors, though the country has no plans to become a member of the oil cartel. Still, Putin's country holds a lot more sway with the members of OPEC than does the United States, the UK, or Latin America.

Moors surmised that OPEC members would soon be hurting because of the crude oil overproduction that they created themselves. So what better way to "keep up appearances" than to form a beneficial alliance?

This is where the deal comes into play…

Here's How the Russia-Iran Oil Deal Will Work

Should the agreement come to pass, Russia will soon be sending crude oil to Iran via ports in the Caspian Sea. In turn, equal export shipments of Iranian crude oil would be sent back over to Russia.

But for Russia, the "swap agreement" would be much less insular. In fact, the deal could see Russian crude being sent further south. That's because Iran also has ports in the Persian Gulf.

And through these ports, Russia could send crude oil as far as the Indian Ocean – right into Asia.

"That would give Russia unprecedented access to markets around the Indian Ocean – including go-to crude buyers in Asia, greatly changing the dynamics of oil markets in this part of the world," reported OilPrice.com on Nov. 5.

It's impossible, however, to guess just how much of an impact this Russia-Iran oil deal could have.

One thing is for certain: Something this monumental should not be ignored by the major media outlets.