The Square stock price today (Thursday) closed its first day of trading at $13.07 as investors rushed into one of the most anticipated tech IPOs of 2015.

But there's one factor that will influence the Square stock price down the road...

The one factor that will determine the future of Square stock is the company's lack of profitability. 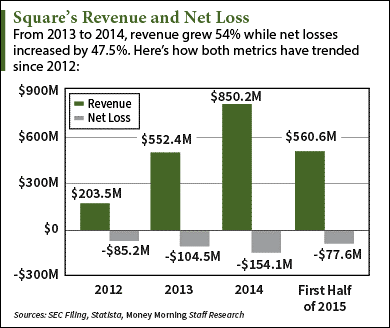 During the first half of 2015, Square earned $560.6 million in revenue, up 51% from the same period in 2014. A large chunk of Square's revenue comes from its partnership with Starbucks Corp. (Nasdaq: SBUX). Back in 2013, all U.S. Starbucks locations started selling Square Readers and accepting payments from the Square Wallet payment app.

However, Square has actually lost $71 million since the partnership began. Starbucks has ended up accounting for 21% of Square's transaction costs.

The company openly admitted in its IPO filing that it may never achieve profitability.

"Our business has generated net losses, and we intend to continue to invest substantially in our business," the filing said. "Thus, we may not achieve or maintain profitability."

Although the company will likely see big gains today, we recommend not investing in Square stock. That's because investing in newly public companies can cause huge losses for traders who aren't big-time investment bankers.

For investors looking to buy SQ after the IPO period, we've developed this safe three-step strategy for investing in Square stock...