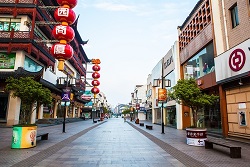 China's productivity crisis is growing – and the ramifications will stretch far beyond the Red Dragon's borders.

A new report from analysis firm Demand Institute, done in conjunction with Nielson and The Conference Board, suggests the Chinese economy is worse off than many suspect. It forecasts 4.5% gross domestic product (GDP) growth on average between 2015 and 2020 – 3.6% if the Chinese government is able to manipulate markets using policy mechanisms.

"While we believe the government will pull enough policy levers to prevent full-blown economic crisis, the danger remains that China is facing a protracted period of declining growth."

The November study concludes, "China's productivity crisis – the result of both institutional deficiencies and a maturing economy – remains unaddressed. For these reasons, we believe China is facing a protracted period of declining growth that will be much longer and deeper than analysts may have predicted."

The Demand Institute's report is just further proof China is pumping the brakes.

Economists have already predicted China's economy will grow just 7% in 2015. That will be the nation's slowest growth rate in 25 years. As recently as 2012, China had double-digit growth.

Here is why China's slowdown is so important for U.S. markets – and the global economy as a whole…

In the 1990s, China's contribution to global growth averaged 10%. It has more than tripled to 34% this decade. Every year, the global economy has relied more and more on China's growth.

"We should be under no illusion that the really big thing in the world, which will have an impact on our living standards, is what happens in China," BBC Economics Editor Robert Peston wrote in December. "Nothing else really matters in comparison."

We reported earlier this year that CIA Asymmetric Threat Advisor Jim Rickards believes China's slowing economy will help usher in the next 25-year Great Depression in the United States.

"What does it mean when the world's second-largest economy hits the brakes?" Rickards said. "That's going to be disastrous to global growth; it's going to pull the rug out from under the sky-high valuations we're seeing in the U.S. stock market."