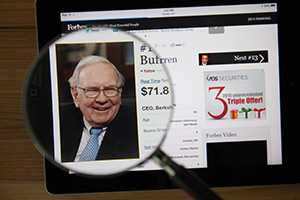 In an interview with CNBC, Buffett said he sold GS stock and WMT stock to raise cash for his planned $32 billion acquisition of industrial goods company Precision Castparts Corp. (NYSE: PCP). Buffett plans to use $22 billion in cash from Berkshire and borrow $10 billion to complete the deal.

But some investors are skeptical of Buffett's reasoning...

Berkshire Hathaway reported $56.2 billion in cash and equivalents at the end of Q3. So analysts believe Buffett could complete the Precision acquisition without the sale of Wal-Mart and Goldman Sachs stock.

Despite selling his stakes, Buffett stated that he still likes WMT stock and GS stock.

Even if Buffett's true intentions aren't clear, investors follow Warren Buffett stocks because many want to directly invest like Warren Buffet. At the very least, many want to know his position on specific companies.

After all, the 85-year-old investing legend has a net worth of $63.2 billion, according to Forbes.

Here's what investors need to know about WMT, GS, and the other Warren Buffett stocks sold in Q3 2015...

If you want to invest like Warren Buffett, you first need a deep understanding of a company's long-term strategies and its fundamentals.

What about Buffet swelling all of Exxon stocks he had in his operations.

I really am interested in Energy at this time ! I will look forward to future developments.
Ed

Million or Billion? What a lousy article…