Stock buybacks have surged in popularity over the last 10 years, and retail investors can reap a number of stock buyback benefits. But it's important to understand how buybacks work before determining if they're good for your portfolio.

Here's everything you need to know about stock buybacks...

How Does a Stock Buyback Work?

Because the company is publicly owned and traded, it repurchases the stock so it can have better control over voting rights.

There are two types of buybacks: tender offer and open market.

A tender-offer buyback is when a company makes a deal to buy shareholders' shares. If the shareholders accept, they negotiate the number of shares they'll give - or "tender" - and the price. This type of stock buyback benefits investors because the company always buys the shares at a premium to the current stock price. 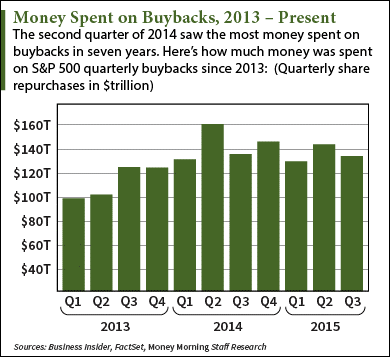 The second and simpler type is an open-market buyback. That's when a company acts like any other individual investor. It buys shares on the stock market at the market price. Open-market buybacks are large-scale yet more efficient because they don't involve bartering with shareholders over the price.

Both types of stock buybacks have surged in popularity recently. The Academic-Industry Research Network reported more than $6.9 trillion has gone into stock buybacks since 2004.

But the excess number of buybacks is becoming a problem. Many large corporations are issuing buybacks to cover up their financial troubles.

"I'm not all that sure that they aren't way out of control," said Money Morning Capital Wave Strategist Shah Gilani. "Buybacks are the biggest part of what we now call financial engineering."

Money Morning Capital Wave Strategist Shah Gilani reveals more about the often insidious nature of stock buybacks. Then he explains how investors can play buybacks to turn a profit...

Wal-Mart is the perfect example of financial engineering. On Oct. 14, WMT stock plunged 10% after the retail giant slashed its sales forecast for 2015. After shedding $20 billion in market value that day, Wal-Mart tried to soften the blow by announcing its buyback program.

While some stock buybacks are just financial engineering tactics, you can still bank profits from them if you make the right moves.

Here's how a stock buyback benefits retail investors like you and me...

I cannot agree we are up for a "generational bull market" There are two things blocking it. One is demographics, the decline in spending by the retiring baby boomer generation. This is not being covered by any increase in spending by the younger generations. Economic policies [Neo-liberalism] are working to impoverish these cohorts, and so they cannot afford to spend more. So we are in deflation [anything less than 2% inflation counts as deflationary]. Even the Chinese economy is in relative deflation as current growth figures of 6% are a lot less than the previous 10% rate. There will be no bull market under these conditions. In fact we will not see any turn around for another 7-8 years, and IMO, never again.

Secondly, we face the "declining utility of energy" We grew when 100 barrels of oil spent only one barrel of cost. Now its down to as low as 15 barrels gained per 1 Barrel of cost. Unconventional oil is as low as 2 barrels per barrel of cost. This situation cannot be reversed. It is not conducive to a bull market.

Consequent upon these facts is the evidence mentioned in the above text, share buybacks. Corporations can see there is little to be gained in investing in productive work apart perhaps in maintenance operations, so the staff see share buybacks as a way to keep the balls in motion and help shareholders stay happy.
It's not a recipe for a bull market.