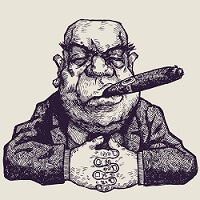 Seven years have passed since the peak of the 2008 financial crisis, and still, not a single too-big-to-fail chief executive officer (CEO) is in jail.

Sure, civil suits have been filed against the guilty Wall Street firms...

As for the Wall Street criminals behind the toxic loans that tanked the economy in 2008 - the actual people, not the institutions they hide behind - there has never been so much as a wrist slap, let alone a criminal conviction.

When all was said and done, these execs cost the United States nearly 9 million jobs (6% of the workforce), a 30% fall in housing prices, and a 50% dip in the stock market. The estimated total crisis-related loss equals around 40% of 2007's gross domestic product.

"America has become a banana republic run by Wall Street criminals," Money Morning Capital Wave Strategist Shah Gilani said earlier this year on May 20. "We all know the big banks are above the law. They are convicted, they admit their guilt (sometimes), and no one goes to jail - they just pay more fines."

That's why we were pleasantly surprised when The Wall Street Journal reported last week that U.S. officials are finally pursuing criminal charges against three Royal Bank of Scotland and JPMorgan execs...

Here's what WSJ had to say on Nov. 17, citing sources familiar with the ongoing investigation:

Officials are working to establish that the bankers ignored warnings from associates that they were packaging too many shaky mortgages into investment offerings and are weighing whether they can prove that constituted fraud, the people said.

At RBS, prosecutors are scrutinizing a $2.2 billion deal that repackaged home mortgages into bonds in 2007, the people said. In a 2013 civil settlement with RBS, the Securities and Exchange Commission described the lead banker on that deal, whom it didn't name, as trying to push it through over concerns of the diligence department.

At J.P. Morgan, prosecutors are focusing on two people who worked on a different residential-mortgage deal, the people said.

To date, both RBS and JPMorgan have written billions in settlement checks to the U.S. government to settle civil charges.

But in those settlements, feds never prosecuted the individuals responsible...