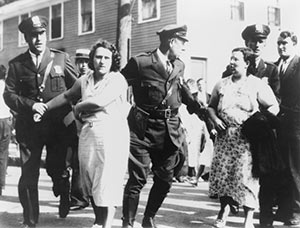 Women textile workers arrested by policemen for picketing the Jackson mill in Nashua, N.H., on Sept. 7, 1934.

The concept of the American strike helped create the nation's great middle class.

It was no easy process. In the early days of "collective bargaining," some of the biggest strikes in U.S. history were often violent and ineffectual.

Regardless, the ability to negotiate one's working conditions has evolved into an American worker's right in the pursuit of life, liberty, and happiness.

Here are five of the largest strikes in U.S. history that paved the way for America's working class…

Five of the Biggest Strikes in U.S. History

American railroads were expanding quickly by the end of the 1800s. In 1886, the Knights of Labor went on strike at the Union Pacific and Missouri Pacific railroads, owned by robber baron Jay Gould. The protest officially began when a member of the Knights of Labor was fired for initiating a company meeting in Texas.

Unrest quickly spread to Arkansas, Illinois, Kansas, and Missouri. Hundreds of thousands of workers across the five states refused to work, citing unsafe conditions and unfair hours and pay.

Ultimately, this strike failed. While the railroad workers themselves protested, engineers and other industrial workers did not join in. And Gould managed to quickly hire nonunion workers. The Knights of Labor disbanded soon afterwards.

Some 350,000 U.S. Steel Corp. employees, represented by the American Federation of Labor (the first federation of labor union in the United States) in Pittsburgh, went on strike from September 1919 to January 1920.

The protest halted almost half of the country's steel industry. Workers were sick of enduring long hours, poor working conditions, and low pay.

U.S. Steel extinguished the mess with an unexpected scare tactic – and violence that lead to multiple deaths…