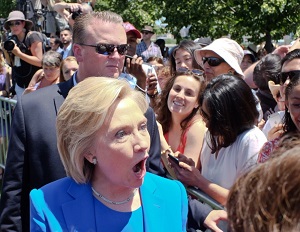 The Hillary Clinton tax plan is being slowly released in increments, like a serialized novel designed to capture and hold the public's attention.

In June, the Democratic presidential front-runner proposed an expensive "targeted tax benefit" - a universal preschool for American households with children four years of age and older. Then in July, Clinton pushed a profit-sharing plan that would provide a new, two-year tax credit for employers. And most recently on Nov. 22, she announced a credit worth up to $1,200 to help families bearing the cost of care for their elderly members at home.

OK, Hillary, you've got our attention. Now tell us how you intend for pay for these promises...

Especially since your campaign relies heavily upon one grand principle: none of the 97% of U.S. households that earn $250,000 or less per year will be asked to contribute higher taxes for these proposals.

"How is that possible?" you ask.

Here's the answer, folks: It's not.

"There is simply no way that the federal government can meet its current fiscal commitments, plus the increased demands of an aging population, and provide the new forms of middle-class relief and business tax relief Ms. Clinton promises, while tapping only the top 3% of earners," reported The Washington Post on Nov. 28.

The proof that Hillary Clinton's tax plan will ultimately fail lies in its lack of counter-solutions to America's looming budget deficit crisis.

She wants to spend more without consequence. And promise more without delivering. Which means that the former first lady is really just doing one thing: she's pandering.

Here's a look at why Clinton won't be able to follow through on her latest tax promises...

Debunked Hillary Clinton Tax Plan Promise No. 1: In July, the Democratic presidential front-runner called for a new, two-year tax credit for employers. It would be, reported CNN on July 17, a profit-sharing plan in which an employer would make contributions on behalf of his or her worker. These contributions would link directly to the profitability of the company, growing tax-deferred over time, like a 401(k). The tax credit - which would be a dollar-for-dollar reduction of a company's tax liability - would be worth 15% of the profits a company shares each year for two years. A higher credit would be available for small businesses.

The problem with this part of Clinton's plan is how much it will cost the government over time -as much as $20 billion over 10 years, reported CNN. While Clinton promised to make up for this lost tax revenue by closing tax loopholes, she failed to elaborate the specifics of how that would ameliorate the heavy monetary burden. Right now, this tax policy simply looks expensive and counterproductive.

Because how does the government typically shoulder heavy cost burdens?

It taxes the people.